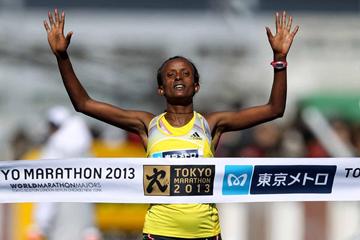 The 14th edition of the Shanghai International Marathon, an IAAF Gold Label Road Race, will see a concerted attack on the course records established 12 months ago in the Chinese city, with the focus of attention possibly being more on the women’s race than the men on Sunday (1).

Ethiopia’s Aberu Kebede can boast of the impressive best of 2:20:30, set when winning in Berlin last year, and she also ran 2:20:33 in the high-quality Dubai Marathon in 2012.

She has the impressive record of winning four of her 10 Marathon outings, including in Berlin in 2010 and in Tokyo earlier this year and so has earned the mantle of being the race favourite in Shanghai.

However, she is looking to bounce back after a disappointing showing at the IAAF World Championships in August, when she struggled home in a disappointing 13th place when many people had her tipped as an outside bet for a medal in Moscow.

Kebede will have company from three other very strong Ethiopians and they have as their target the course record of 2:24:08 set by their compatriot Feyse Tadese in 2012.

Merima Hasen, still only 21, has a best of 2:23.06 set when she was a teenager in 2010 and she went close to that when she finished second in Paris this year with 2:23:14; into the bargain she is noted for her high level consistency with five of her last six Marathons being inside 2:26.

Defending champion Tadese is not returning to Shanghai but Ashu Kasim, who finished second last year, will be aiming to do as well, if not better, than 12 months ago when she ran 2:24.09 and just lost out by one second in a very tight finish.

Kasim has a certain fondness for Marathons in China, having set her personal best of 2:23:09 when winning in Xiamen last year.

Ethiopia’s former 3000m Steeplechase record holder Zemzem Ahmed has converted her talents to the road in the last 18 months and will be looking to improve substantially on her best of 2:27:12 in the third Marathon of her career.

Kenya’s Lydia Cheromei can look back on an international career stretching back more than two decades and remains the youngest ever winner at the IAAF World Cross Country Championships after her junior women’s victory in 1991.

Now 36, she is still looking to add to her extensive resume.

Cheromei was in fine fettle in 2012 and set a personal best of 2:21:30 when finishing sixth in Dubai, one place behind Kebede, and had another good run when winning the Yokohama Marathon in 2:23:07.

However, she has struggled to recapture that form this year and she will be racing over any distance for the first time since finishing in sixth place at the Prague Marathon in May, when she didn’t break 2:34.

She will be joined on the start line by her fellow Kenyan Emily Samoei, who won the 2012 Barcelona Marathon in a personal best of 2:26:52 although, like Cheromei, she has not been in the same form this year and not gone under 2:30 in her two Marathons so far in 2013.

European interests will be represented by Poland’s Karolina Jarzynska, who won the Lodz Marathon in a personal best of 2:26:45. She is also Europe’s leading runner over 10,000m on the track this year, having set a Polish record of 31:43.51 in the Czech city of Ostrava.

A tilt at Wanda Panfil’s long-standing Polish Marathon record of 2:24:18, set in the 1991 Boston Marathon, might not be out of the question.

Kenya’s Dickson Chumba is the fastest man on the start list with 2:05:46 to his name, when he set the current Eindhoven Marathon course record in 2012.

However, Chumba is intending to have his second Marathon in little more than a month having finished eighth in the Amsterdam Marathon so it could be a question of how much he has left in his legs.

Alongside Chumba, there will be two other good Kenyans who have the credentials to reduce the course record of 2:09:01 set by their countryman Sylvester Kimeli Teimet 12 months ago.

Samuel Ndungu ran an impressive 2:07:04 to win the Lake Biwa Marathon in Japan on his debut over the distance last year. He followed that up with a run of 2:07:26 to finish seventh in the 2012 Chicago Marathon but has not run a Marathon since.

Stephen Chemlany set a personal best of 2:07:44 when finishing fourth at the Berlin Marathon in September but, like Chumba, it will be interesting to see how well he has recovered from that race.

Another Kenyan, Jackson Kipkoech Kotut, has a best of 2:07:30, which dates from when he won the 2010 Barcelona Marathon, although he has not gone under 2:10 for three years.

Another consistent runner who should challenge for the honours is Ethiopia’s Teferi Kebede, who ran under 2:08 twice last year, including a best of 2:07:35 when finishing third at the Tiberias Marathon in Israel.

One runner who might not automatically be considered a favourite but could cause a surprise is Eritrea’s Beraki Beyene, who has the relatively modest personal best of 2:09.01 but who also finished a respectable 11th at the World Championships in Moscow in conditions which saw many ostensibly faster runners wilt badly.