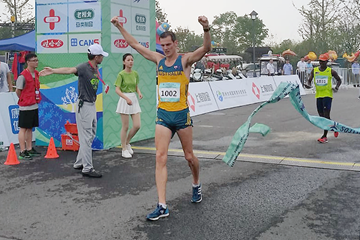 Two-time defending individual champion Dane Bird-Smith of Australia is aiming to collect his third straight title at the Around Taihu International Race Walking competition, the last leg of the 2018 IAAF Race Walking Challenge and a three-day event that will start on Monday (24) in Suzhou, China.

First launched in 2013, the competition features both individual and team contests. Each stage is usually held in a different scenic area alongside the Taihu Lake. And similar to cycling tour events, the leaders in the individual standings after each stage will wear a yellow vest for the next stage.

The contest used to comprise four stages of racing on four consecutive days. This year, however, the event has just three stages: a 20km race for the opening stage held in the Taihu Lake holiday resort and a 12km race in each of the next two stages in Taihu New Town and the ancient town of Mudu.

Bird-Smith has competed in Suzhou each year since the inaugural edition of the race. He finished second individually in 2014 and 2015 and went on to win the individual race in 2016 and 2017. He also finished second in the team contests in the past two years.

The Olympic bronze medallist has had a mixed year, though. He won the 20km race walk at the Commonwealth Games on home soil in Gold Coast with a season’s best of 1:19:34, but one month later he picked up an injury at the IAAF World Race Walking Team Championships Taicang 2018, putting him out of action for the next few months.

Returning to China, the 26-year-old Australian will be keen to bounce back from his experience in Taicang, which also located in Suzhou. His familiarity with the competition and the courses will be an advantage.

Local star Wang Kaihua is another favourite in the individual competition. The 24-year-old is the fastest entrant thanks to his winning mark of 1:17:54 at the 2017 Chinese Race Walking Grand Prix in Huangshan. He retained that title in Huangshan in 1:19:45 earlier this year but had to settle for a silver medal on his home soil at the World Race Walking Team Championships.

Last month Wang scored his first continental title as he clocked 1:22:04 to win the gold medal at the Asian Games in Jakarta.

Wang’s teammate Cai Zelin is the second fastest man on paper with a PB of 1:18:47 set back in 2012. The Olympic silver medallist has been bothered by injuries and inconsistent form, failing to finish the race in Taicang, which also served as the Chinese team’s qualification event for Asian Games. The competition in Suzhou would be a good chance for Cai to prove his worth.

The host nation has fielded two strong teams for the competition with Wang and Cai both representing team A. But they will face formidable opposition as individual athletes are able to form their own teams, regardless of nationality.

This year Bonfim, Chocho, Shange and Ever Palma will all return to Suzhou. The men’s field will also include sub-1:20 athletes like Colombia’s world champion Eider Arevalo, Perseus Karlstrom of Sweden and Germany’s Christopher Linke.

The women’s field will be led by Olympic silver medallist Qieyang Shijie, a 1:25:16 performer who is now leading the IAAF Race Walking Challenge standings with 34 points following victories in Rio Maior and La Coruna, as well as her second-place finish in Taicang. Her winning mark of 1:26:28 in the Spanish city of La Coruna ranks as the second fastest time in 2018.

In the absence of Mexico’s Maria Guadalupe Gonzalez, who is second in the standings with 24 points, Qieyang has already done enough to clinch victory in this year’s Race Walking Challenge. But in Suzhou she will face stiff challenge from some of the world’s best race walkers, including teammate and world champion Yang Jiayu.

Qieyang edged Yang after photo finish separated the duo at the national Race Walking Grand Prix in March, while Yang held off Qieyang to win the women’s 20km title at the Asian Games last month. In career head-to-heads, the two women are level at 3-3.

The field also include Brazil’s Erica Rocha de Sena, who set a South American record of 1:26:59 to finish fourth at the 2017 World Championships. As last year’s winner of the Race Walking Challenge, the consistent Brazilian has piled up 23 points in the current season including a second-place finish in Monterrey.

As in the men’s race, the hosts have fielded two teams with the Chinese team A looking to have assembled the strongest possible squad. Apart from Qieyang and Yang, the quintet also includes women’s 50km world record holder Liang Rui, world U18 and U20 champion Ma Zhenxia as well as Wang Yingliu, a 1:28:15 performer with a season’s best of 1:28:37.