Ethiopia’s Roza Dereje Bekele will take centre stage at the eDreams Mitja Marato Barcelona on Sunday (10) after announcing her intention to break the world half marathon record at the IAAF Gold Label road race.

The 21-year-old set her PB of 1:07:00 when finishing second at the Istanbul Half Marathon last year. That performance came just three months after winning the Dubai Marathon in a lifetime best of 2:19:17.

Dereje is set to compete at the London Marathon in April this year, but she will be using this weekend’s race in Barcelona as a key stepping stone towards that. And not content with simply winning, she wants to challenge the world record of 1:04:51 set by Kenya’s Joyciline Jepkosgei in Valencia in October 2017.

“Several months ago I thought Barcelona is the best place to run fast so I decided to prepare for this race,” she said at the pre-race press conference. “My training has gone according to plan, I’ll have a pacesetter for extra confidence and I feel optimistic about the challenge.”

The Kenyan contingent includes Lucy Cheruiyot, Sally Chepyego and Celestine Chepchirchir. The former boasts a career best of 1:07:23 set in September 2017 while Chepyego set her 1:07:52 lifetime best when taking bronze at the 2014 World Half Marathon Championships. More recently, the 33-year-old recorded a marathon PB of 2:23:15 to finish second in Ljubljana, one place ahead of Kuma. Chepchirchir has a best of 1:08:35, set in Paris last year.

Kenya’s Eric Kiptanui will be the athlete to beat in a quality men’s field. The 29-year-old clocked an impressive 58:42 to win the Berlin Half Marathon last April which places him as the joint sixth-fastest man on the world all-time list. It was just his second half marathon to date, having also won in Lisbon one month prior on his debut at the distance.

In Barcelona he will face three other athletes who have bettered the 60-minute barrier: Eritrea’s Samuel Tsegay, Ethiopia’s Azmeraw Bekele and Uganda’s Moses Kurong.

Tsegay took silver at the 2014 World Half Marathon Championships in a PB of 59:21, but his last appearance came at the Valencia Marathon two months ago when he had to settle for 11th in 2:08:20.

They might not have the fastest half marathon PBs of the field, but Ethiopian duo Solomon Deksisa and Betesfa Getahun could prove to be Kiptanui’s toughest rivals.

Deksisa’s last outing was a 2:04:40 PB to finish third at the Amsterdam Marathon four months ago, which suggests his half marathon PB of 1:00:12 is due for serious revision. The 20-year-old Getahun, meanwhile, is fresh from a massive 10km PB of 27:39 in Valencia last month.

Eritrea’s Abrar Osman, who ran 27:38 over 10km for fourth place in Madrid on 31 December, will be another in-form athlete on the start line.

Weather forecasters predict a sunny day, with temperatures between 12-13C at the time of the event but a high likelihood of strong wind.

BACK
Pages related to this articleAthletes
Roza DEREJE 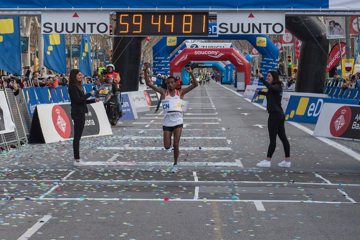