Past champions return for the Bank of America Chicago Marathon as Kenyans Dickson Chumba and Florence Kiplagat look to defend their titles from last year at the IAAF Gold Label Road Race on Sunday (9).

Chumba captured last year’s title after pulling away in the final three miles of the race and crossing the finish line in 2:09.25. The time was the slowest in Chicago since 2007 since race organisers decided to remove pacesetters for the elite races.

The 29-year-old returns for his third running of the Chicago Marathon, having finished third in 2014 with a PB of 2:04:32, making him the fastest in this year’s field.

He last competed back in April, finishing 10th at the Yangzhou Half Marathon in 1:02:12. His only marathon of the year so far was in Tokyo, where he finished third in 2:07:34.

Chumba is expected to be closely challenged by Tsegaye Kebede, who won this race in 2012 with his personal best of 2:04:38 and finished second in 2010. His most recent outing over the classic distance was a fifth-place showing in 2:10:56 at the Rotterdam Marathon in April.

Aside from Chumba and Kebede, three other men in the field have run 2:07 or faster, including Chumba’s compatriots Abel Kirui and Micah Kogo.

Kirui, the two-time world champion, finished just two places and 32 seconds behind Chumba in Tokyo earlier this year. Kogo, who set his PB of 2:06:56 when finishing fourth in Chicago in 2013, placed fourth in Paris earlier this year in 2:08:03, the second-fastest time of his career.

Ethiopia’s Abayneh Ayele goes into the race with the fastest season’s best. The 28-year-old clocked a PB of 2:06:45 to finish sixth in Dubai at the start of this year and then went on to place fourth at the IAAF World Half Marathon Championships in Cardiff, finishing just a stride behind double Olympic champion Mo Farah.

World record-holder Dennis Kimetto was initially scheduled to race but was forced to withdraw due to a leg injury.

Behind Chumba, USA’s Luke Puskedra is the next best returner from 2015, having finished fifth in last year’s race in 2:10:24. Puskedra narrowly missed making the US Olympic team for Rio as he placed fourth at the Olympic trials in 2:14:12.

Kenya’s Stephen Sambu has found success on the road racing circuit after a successful collegiate career in the United States and will be making his marathon debut. He tuned up for Chicago by winning the seven-mile New Balance Falmouth Road Race in 32:10 in August.

In the women’s race, Kiplagat will try to become the first woman to win consecutive titles since Berhane Adere of Ethiopia won in 2006 and 2007. Last year, Kiplagat made her decisive surge in the 25th mile to pull away from Ethiopia’s Yebrqual Melese and Birhane Dibaba.

Kiplagat managed a podium finish in April’s London Marathon with a 2:23:39 showing. She remains the half marathon world record-holder with her 1:05:09 victory in Barcelona in 2015.

Fellow Kenyan Edna Kiplagat, who is the only other woman in the field to have run faster than 2:20, will make her debut in Chicago. In addition to a third-place finish in February’s Tokyo Marathon, the two-time world champion set a 10km PB of 31:06 in June.

The other former champion in the field is Atsede Baysa, who was victorious in Chicago in 2010 and 2012. She marked her resurgence on the Abbott World Marathon Majors stage with a 2:29:19 win in April’s Boston Marathon.

Melese, last year’s runner-up, returns to Chicago. Fellow Ethiopian Gulume Chala, meanwhile, will be making her debut in the windy city, having won the 2015 Frankfurt Marathon in a PB of 2:23:12.

Paris Marathon champion Visiline Jepkesho, who represented Kenya at this year’s Olympics and last year’s World Championships, is also in the field, so too is compatriot Purity Rionoripo, who is quickly establishing herself as one of the world’s top road runners, having won the world U18 3000m title in 2009. 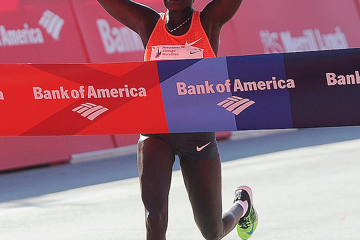 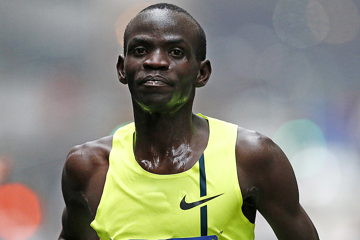