A deep field is targeting an assault on both the men’s and women’s course records at the Bank of Lanzhou Cup - Lanzhou International Marathon, an IAAF Gold label road race, on Sunday (2).

Eight runners toeing the line have career bests faster than the 2:10:10 course record set by Abayneh Ayele of Ethiopia in 2015, with Ethiopia’s Limenih Getachew the fastest thanks to his personal best of 2:06:49 set at the 2014 Paris Marathon.

The 29-year-old came close to that mark last October when he registered a winning mark of 2:07:34 to break the Portuguese all-comers’ record at the Lisbon Marathon. He achieved his second career best time of 2:07:30 in March with a fifth finish in Barcelona.

It will be Getachew’s second race in China following his fourth place finish at the Hengshui Lake Marathon in 2016.

Bahrain’s Benson Seurei is another man to watch. The 35-year-old, who used to compete mainly in middle distance events and grabbed a 1500m silver medal at the Asian Indoor Championships in 2016, only debuted over the classic distance in 2017 but progressed rapidly with his PB of 2:07:37 set last December in Valencia.

Seurei clocked 2:08:08 to finish fourth at the Lake Biwa Marathon in March and is yet to gain his first title after five marathon races.

Shumet Akalnew of Ethiopia is also chasing his first marathon title in Lanzhou. The 31-year-old clocked a life-time best of 2:08:50 to finish third in Kosice last year and achieved another third place finish in Mumbai four months ago with a 2:10:24 clocking.

The Ethiopian contingent also include Bira Seboka, a 2:08:51 performer, and Afewerk Mesfin, who improved his PB to 2:09:28 in Xiamen this year. The other sub-2:10 runners in the field are Bahraini Zelalem Bacha with a PB of 2:09:16, Kenya’s Mike Kiprotich Mutai, whose PB of 2:09:18 dates back to 2012, and Motlokoa Nkhabutlane of Lesotho.

Worknesh Edesa of Ethiopia improved her PB by nearly three minutes to 2:21:05 in Dubai this January to make her the fastest woman on paper. Since her marathon debut in 2015, the 26-year-old Edesa has never finished outside of the top three in each marathon she’s contested. Even her slowest clocking of 2:31:06 set in 2015 is better than Kiyara’s Lanzhou record.

Edesa’s compatriot Gutemi Shone, 27, is another title contender. The former Ottawa and Seoul marathon winner recorded her career best of 2:23:32 in Houston four years ago and scored a 2:24:28 victory in Sevilla in February.

Fatuma Sado, also from Ethiopia, is the only woman in the field that has competed in Lanzhou before, clocking 2:38:39 to finish fifth in her previous outing in the western Chinese city. The 27-year-old has titles from Hamburg, Los Angeles, Xiamen, Beijing, Warsaw and Osaka on her CV and registered her PB of 2:24:16 from her third place finish in Toronto in 2015.

The 35-year-old veteran Aberu Mekuria is also known for her consistency with victories in Koln, Hengshui, Ottawa and Valencia to her name. Two month ago she added the Chongqing Marathon title to her title collection with a PB of 2:24:30.

Fantu Jimma, 31, will also arrive in Lanzhou with high spirits after taking the victory at the Wuhan Marathon in April. Her winning mark of 2:28:25 is some two minutes shy of her PB of 2:26:14 set in Dubai four years ago.

The field also includes Ethiopian duo Hiwot Gebrekidan, a 2:25:45 performer, and Sifan Melaku, who just improved her PB to 2:26:46 in Sevilla in February, as the women’s race is very likely to see a sweep of podium by Ethiopian runners. 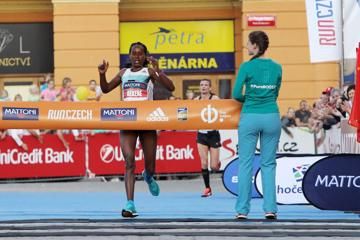 Gezahegn and Bekere victorious in Lanzhou... 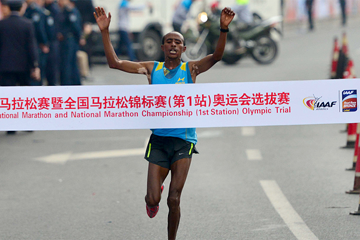