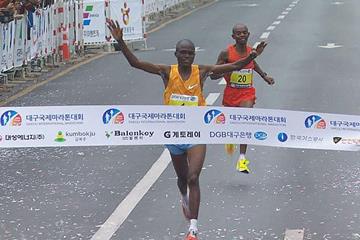 James Kwambai, the 2016 champion, will return to the Daegu International Marathon on Sunday (2) in a bid to become the first two-time men’s winner at the IAAF Silver Label Road Race.

The former Kenyan record-holder, whose PB of 2:04:27 is now eight years old, has a strong record in Korea. He has won the Seoul Marathon on three occasions and triumphed in Daegu last year in 2:10:46.

Compatriot Peter Some could be his toughest opponent. The 26-year-old set his personal best of 2:05:58 when winning the 2013 Paris Marathon and he heads to Daegu off the back of a victory at the Macau Marathon in December.

Like Kwambai and Some, Chele Dechasa’s 2:06:33 PB is several years old now but the Ethiopian has remained competitive in international marathons. He finished third in Seoul last year in 2:09:19 and was eighth at the Dubai Marathon earlier this year, running 2:10:24. The last time he raced in Daegu was at the 2011 IAAF World Championships when he failed to finish, so he will be aiming to banish those demons this weekend.

Popular Japanese runner Yuki Kawauchi will be contesting his 11th race and second marathon of 2017. He won the Ehime Marathon in February with a course record of 2:09:54 and will be buoyed by his recent selection for the IAAF World Championships London 2017. Like Dechasa, Kawauchi also raced in Daegu at the 2011 World Championships and was somewhat more successful, placing 17th.

Kenya’s Evans Korir, Eritrea’s Mulue Andom and Zambian record-holder Jordan Chipangama could all be in contention for a podium finish on Sunday in what looks set to be a close race in near-perfect conditions.

The women’s race looks to be similarly competitive.

Winnie Jepkorir brings better recent form to the race. The 27-year-old Kenyan won in Florence last year in 2:28:46, just 49 seconds shy of the PB she set at the 2014 Hamburg Marathon.

Compatriot Pamela Rotich has contested just five marathons in her career but has finished on the podium in all of them. Her most recent outing over the classic distance was a 2:28:52 runner-up finish in Hefei.

Olga Kotovska represented Ukraine at last year’s Olympics. The national 10,000m and half-marathon champion has a PB of 2:28:47, set when winning the 2014 Rennes Marathon. She has finished in the top three in 11 of her 14 marathons to date.

Loice Jebet Kiptoo, who made a big breakthrough last year to win the Porto Marathon in 2:29:13, could also be a factor, so too could fellow Kenyan Nancy Jebet Koech.