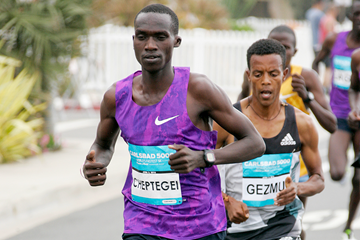 Now recovered from the knee injury that has kept him out of racing since April, world silver medallist Joshua Cheptegei will return to action on Sunday (23) at the Dam tot Damloop, a 10-mile IAAF Silver Label road race from Amsterdam to Zaandam.

The 22-year-old Ugandan pushed Mo Farah all the way in the 10,000m at the IAAF World Championships London 2017, ultimately taking the silver medal just 0.43 behind the multiple world and Olympic champion. Earlier this year, Cheptegei won the 5000m and 10,000m at the Commonwealth Games and looked poised for a promising track season but was then side-lined by a knee injury.

Cheptegei, who last year came within four seconds of the world best for 15km at the Zevenheuvelenloop in Nijmegen, will be making his second appearance at the Dam tot Damloop after finishing second in 2016.

Belgium’s Bashir Abdi looks set to be Cheptegei’s main opponent on Sunday. The 29-year-old took the 10,000m silver medal at the recent European Championships and has competed at the Dam tot Damloop on four previous occasions.

Ayele Abshero will also be a strong challenger. The experienced Ethiopian set his 10-mile PB of 45:24 at this race back in 2008, but is still highly competitive and clocked 2:07:19 at the Hamburg Marathon earlier this year. He is also a former winner of the Dubai Marathon, the Zevenheuvelenloop and the Egmond Half Marathon.

In preparation for the Amsterdam Marathon on 21 October, Dutch international Michel Butter will also be on the start line on Sunday. Butter, who finished sixth at last year’s New York City Marathon, will be joined by compatriots Khalid Choukoud, Edwin de Vries and Ronald Schröer.

The course record of 44:27 is just three seconds shy of the world best and was set by Leonard Komon in 2011, one year after the Kenyan set a world 10km record and world 15km best.

As is tradition at this race, the women’s field will set off before the men with a head start of 6:04 – the difference between the men’s and women’s course records. The first athlete to finish, man or woman, will receive a bonus of €5000. Joyce Chepkirui, the 2013 winner, was the last woman to scoop the bonus.

Israel’s Lonah Salpeter and Susan Krumins of the Netherlands, the top two finishers from the 10,000m at the European Championships, headline this year’s women’s field.

Krumins rarely contests road races, but she won the 2016 Zevenheuvelenloop in 49:30 and has a strategy in place for Sunday.

“Salpeter likes to change gears as she did at the European Championships in Berlin, so I just have to keep my own pace,” she said. “10 miles is quite far for me. I once ran a half marathon, which didn’t go so well (a 1:10:52 clocking in Venlo last year). On Sunday I’ll try to run conservatively for the first half and not waste too much energy so that I can really do something special in the second half.”

They will take on defending champion Mercyline Chelangat of Uganda and Ethiopia’s Dibabe Kuma, who finished third in this race in 2015.

The women’s course record of 50:31 was set by Norwegian distance running legend Ingrid Kristiansen back in 1987.

The weather forecast for Sunday morning indicates some rain, a temperature of 12C and a moderate southeast wind, which is favourable for the course because it runs almost entirely northwest.

This weekend’s race, the 34th edition of the event, is expected to attract 46,000 runners. Together with the five-mile race held on Saturday, there will be 87,000 participants in total in the Dam tot Dam weekend, making it one of the largest sporting events in the Netherlands.

Stephen Mokoka is aiming to become the first South African winner of the Sanlam Cape Town Marathon since 2010, while Namibia’s Helalia Johannes is looking to improve on her runner-up finish from last year’s edition of the IAAF Gold Label road race.

“Now all my friends can watch me compete at home,” said Mokoka, who will be running his first marathon on home soil. The 33-year-old set his lifetime best of 2:07:40 in 2015.

Fellow South African Desmond Mokgobu has competed in the Cape Town Marathon twice before, finishing sixth in 2016. Earlier this year he won the Beppu-Oita Marathon in a lifetime best of 2:09:31 and more recently he clocked a half marathon PB of 1:01:50.

“With Stephen (Mokoka) running, you know it will be fast,” Mokgobu said at the pre-event press conference.

With a best of 2:07:46, Jacob Cheshari is the second-fastest entrant for Sunday’s race, but the Kenyan’s PB was set back in 2013 and he has bettered 2:10 on just one other occasion since then.

Compatriot Albert Korir, who clocked 2:08:17 at this year’s Lake Biwa Marathon, appears a better prospect. The 24-year-old has achieved podium finishes in all six of his marathons to date.

Johannes finished second in the women’s race last year, just six seconds shy of the winner. Earlier this year she won the Commonwealth Games title in 2:32:40 in difficult conditions and has since reduced her own half marathon national record to 1:10:51.

Ethiopian duo Askale Alemayehu and Ayantu Gemechu Abdi, with respective PBs of 2:29:01 and 2:30:38, are expected to provide the toughest opposition. Britain’s Tish Jones, the 2016 Cape Town winner, is also in the field.

Tanzania’s Failuna Matanga could be the surprise package. She has contested just one marathon before, a 2:34:12 clocking in Amsterdam, but recently reduced her half marathon PB to 1:09:36.

Kenya’s Vivian Kiplagat will start as favourite in the women’s race. She set a PB of 2:27:08 when finishing second in Milan in April while more recently she tested out the streets of Buenos Aires by winning the city’s half marathon in August in 1:09:10.

The race will also serve as the 2018 South American Championships and a qualifying event for the Pan American Games in Lima.

Many of the top runners of the area will compete to grab those honours, including Peruvians Christian Pacheco (the fastest precedent with 2:12:16 from 2016), Raúl and Gladys Machacuay, Brazilian Giovani dos Santos, Argentines Mariano Mastromarino (winner in 2014) and María Peralta, Paraguayans Derlis Ayala and Carmen Patricia Martínez, Chilean Enzo Yáñez and Ecuadorians Miguel Almachi and Rosa Alva Chacha (winner in 2017).

The race will start at 7:00 in the neighbourhood adjacent to River Plate’s Stadium. It will go by the downtown area, heading all the way to the south section, by La Boca, before returning to Núñez. It will be broadcasted live by ESPN.