Desisa and Rotich ready to defend in Boston

Lelisa Desisa and Caroline Rotich are set to defend their titles at the 120th running of the BAA Boston Marathon on Monday (18), one of the world’s most venerated road races one of only three IAAF Gold Label Road Races in the US.

Although the point-to-point race from the distant western suburb of Hopkinton in to Boston’s Back Bay is generally known more for its challenging profile than its fast times, Boston has been a prestigious international title since long before the professional era. Launched in 1897 on a course planned specifically in imitation of the classic Marathon-to-Athens course at the first modern Olympics, the race was one of the most competitive in the world in the days before international air travel. More recently, winning in Boston launched the careers of athletes like Bill Rodgers, Joan Benoit Samuelson, Uta Pippig, and Robert Cheruiyot.

Highlighting this year’s men’s race is defending champion Desisa, winner in 2013 and 2015. Should Desisa pick up a third win, a feat which has proven remarkably difficult in Boston (Cheruiyot was the last man to do it), he’d seal his place as one of Boston’s favourites, a position he first earned by returning his 2013 medal to the city in a gesture of sympathy.

Should the day prove warm, and forecasts suggest it might, Wesley Korir could have an edge. Korir was the winner in 2012, the last hot day in Boston. Since then, however, Korir has been elected to the Kenyan parliament, a side job which has put a dent in his training regime. To win, the world’s fastest legislator will need a race which lets him use his tactical intelligence as much as his speed.

Seven men with sub-2:05 credentials on the start line

Along with the two former champions, Boston brings five more men with sub-2:05 PBs to the narrow starting line in Hopkinton. Sammy Kitwara ran 2:04:28 at the 2014 Chicago Marathon, making him the fastest in the field by a bare four seconds over Tsegaye Mekonnen, whose 2:04:32 came in Dubai the same year.

Kitwara, who has finished second twice at the Chicago Marathon, joins Yemane Tsegay, second last year here in Boston, as contenders looking for their first big wins. Kitwara is the younger of the two, with only seven previous marathon finishes under his belt. Tsegay, who also collected silver at the World Championships marathon in Beijing last summer, has wins in Ottawa, Daegu, Eindhoven, Taipei, and Otsu (Lake Biwa) on his resume, but nothing as big as Boston yet.

Tsegaye Mekonnen, a virtual kid at 21, has only five marathon starts on his record, but has twice run faster than 2:05. Both of those marks came in Dubai, where Mekonnen has finished first (in 2014) and third (this January); in 2014 he came back to finish fifth in London. His performance in Boston may depend on his ability to recover after Dubai and build on his fitness. Boston will also be Mekonnen’s first major race on a course with significant hills.

Joining Mekonnen, another member of the sub-2:05 club is also another Dubai victor, Lemi Berhanu Hayle. Hayle doubled back from winning Dubai in January 2015 to add another win in Warsaw that April. He followed that up four months later with a 15th-place finish at the World Championships in Beijing. This year he was second in Dubai, notably ahead of Mekonnen.

Among the women, picking a favorite might be as challenging as arriving in Newton ready to climb. Defending champion Caroline Rotich is back and not to be ignored, but her 2015 victory was not the kind of dominant performance that intimidates the competition. Outside victories in Prague and Las Vegas, Rotich’s best performances have been fourth-place finishes in Boston, Chicago, Tokyo, and Yokohama.

The next most familiar name on the entry list is that of Tiki Gelana, the Olympic champion, Olympic record-holder and Ethiopian record-holder. Gelana earned all of those accolades in 2012, however, and since then her best result has been a third-place finish in Tokyo in 2015 as she tries to recover the thread of brilliance she followed in the last Olympic year.

Gelana’s presence in Boston is likely due to both the Ethiopian and Kenyan federations considering results from Boston in their Olympic team selection. A win in Boston, even without a sparkling time, would make it easy for Ethiopian officials to give her the opportunity to defend her Olympic title.

Buzunesh Deba also demands attention on the starting line. A two-time runner-up in New York and the owner of the fastest legal time on the Boston course (Deba finished behind Rita Jeptoo in 2014), Deba is Ms Silver of major marathons.

As in the men’s field, Dubai winners are prominent in the women’s field. Tirfi Tsegaye is the current Dubai champion and won in 2013 as well; Mamitu Daska is also a past Dubai winner. Atsede Baysa has won both the Chicago and Paris Marathons twice; Joyce Chepkirui has won in Amsterdam and Honolulu since finishing 10th here in 2015. And Jelena Prokupcuka, the two-time New York champion and two-time Boston runner-up, has returned for another tilt at the Boston windmill.

The top women will start shortly after 9:30, nearly half an hour before the men lead the first of five mass waves.

BACK
Pages related to this articleAthletes
Tiki Gelana 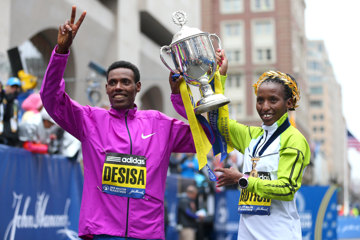