When the gun sounds the start of the men’s race at the 20th IAAF World Half Marathon Championships on Saturday (6) morning here in this Black Sea coast resort town, the main focus of Kavarna 2012 will fall squarely on one man – Eritrea’s Zersenay Tadese, the event’s World record holder who’ll be chasing a fifth global title at the event.

The situation was similar two years ago in Nanning, China, where Tadese was looking to add to his four consecutive titles, a streak that began in 2006. He came up a bit short – four seconds shy, to be precise – but still took silver to ensure he wouldn’t return home empty-handed.

Now 30, Tadese remains very much one of the premiere half marathoners in the world. In 2011 he clocked 58:30 in Lisbon, just sevens seconds short of his World record and while he's raced sparingly this year - he won in Lisbon last spring with 59:34 - he finished a notable sixth in the Olympic 10,000m in August, his most recent appearance.

Relatively warm conditions, sunny skies and high humidity are expected on Sunday, although the climate hasn’t ever really been a major hurdle for Tadese, whose native Eritrea is one of the hottest countries on the planet. His second global title came in the now-legendary heat and humidity of Mombasa in 2007 when he ended Kenenisa Bekele's World Cross Country streak with his triumphant run. His third Half Marathon title, won in dominating fashion with a largely solo run, came in the heat and under the sun of Rio de Janeiro in 2008.

But he’ll face some stiff competition on the roads, namely by a formidable Kenyan squad who have won the past five team titles, six of the last seven, and 13 of 19 in all.

The standout name is that of Eliud Kipchoge who is no strange to IAAF World Championships. After winning the global title over 5000m in 2003 when he was just 19 years old, he has remained a consistently formidable force on the track since. Now 27, Kipchoge is ready to take to the roads. On 1 September he produced a sensational 59:25 performance at the Lille Half Marathon, the second fastest debut ever over the distance. It’s perfectly reasonable to suggest that Kipchoge can go faster. How well he follows up just five weeks after his debut will also illustrate how truly suited he is to the longer distances.

His compatriot, 22-year-old Pius Kirop, also has a 59:25 career best from Berlin earlier this year but is already in his fourth season of international half marathoning and could be ready for a breakout run.

Faster still is Stephen Kibet Kosgei, the 25-year-old who smashed through the one-hour barrier when he won the City Pier City Half Marathon at The Hague in March in 58:54. That performance, which elevated the 25-year-old into the No. 7 position all-time, is still the year's second fastest.

Kenya's foursome will likely be rounded out by Philemon Limo who's clocked 59:32 this year to win the Roma-Ostia Half Marathon, just two second off of his personal best. Limo, 27, also has Championship experience, having finished seventh at the 2011 World Cross Country Championships.

Meanwhile, Tadese will be backed-up by Samuel Tsegay, the 23-year-old who will likely pick up Eritrea's distance running mantle when Tadese is ready to step aside. Just 23, he's already collected fifth place finishes at the 2009 and 2010 editions of these championships as well as at the 2010 World Cross Country Championships. He's run 1:01:09 this year but has a personal best of 1:00:17. He didn't finish the Olympic Marathon so will be looking to make up for that disappointment.

Some others to watch include Nicholas Kiprono of Uganda who has a 1:00:25 career best and Stephen Mokoka of South Africa who has also run under 1:01:00 this season.

The weather forecast for race time calls for high humidity with temperatures between 15-16 C. (60-61 F.) under clear sunny skies. 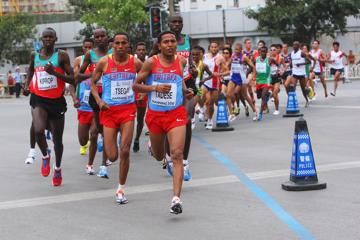