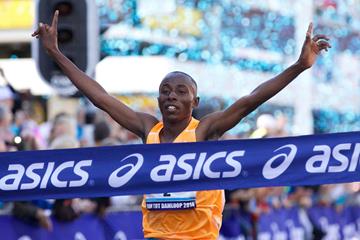 After a disappointing experience at the IAAF World Championships, Wilson Kipsang is looking for some redemption in the Dam tot Damloop, an IAAF Silver Label Road Race over 10 miles in the Netherlands on Sunday (20). .

Kipsang had a great first part of the season, including finishing second at the London Marathon in 2:04:47 but the former world record-holder for the classic distance (2:03:23, Berlin 2013) had to pull out after 35km in the Chinese capital.

On Sunday, the circumstances and the distance will be different. After a week of rain across the Netherlands, the forecast for Sunday in and around Amsterdam is a perfect 17C, dry and not too windy.

“My recovery after Beijing has been well,” added Kipsang. “So I hope I can win the race, and beat the women too.”

In the Damloop, the elite women start six minutes earlier than the men, the rounded-up difference in the course records between the genders.

Kipsang’s compatriot John Mwangangi knows what that implies. He has run this race four times already, and won it twice, in 2010 and last year.

“This year I want to improve my personal best of 45.15,” said Mwangangi. “All eyes will be on the big names, like Wilson. I’m the man who waits until the last part of the race. In the beginning, I need some time to warm up and I just follow the others; then I start to watch and think, ‘who is there and how strong are they?’

“But when we are with two or three men in the front, I think ‘maybe I can win this one and I will run a fast last 5k',” he expanded, revealing some of his thought processes during a race.

Kipsang commented further: "Of course, the preparation is different to the marathon. You do need more speed, but still it’s 16 kilometres, so you need some endurance too. I just hope that I will be fast enough.”

Kipsang is currently preparing for the New York Marathon on 1 November, which he won last year. “That’s my last big goal for this year. Of course I’m dreaming about the (Olympic) marathon in Rio but we don’t know yet how the selection for the Kenyan team will be, and when we will be able to qualify. That’s something for next year."

Another of the main contenders in the men’s race is Ayele Abshero from Ethiopia, who was fourth in London last year and has a marathon best of 2:04:23. It will be his first race this year.

Abshero’s compatriot Yenew Alamirew, one of the fastest men in the world over 5000m, will make his debut at this distance as will Kenya's Edwin Kiptoo. The latter ran 59:35 earlier this year for the half marathon in the City-Pier-City Run in The Hague.

Kenya’s Joyce Chepkirui won the Damloop in 2013 in 51:33 and will be looking to regain her title.

Fellow Kenyans Sylvia and Ivy Kibet are also in the field. Sylvia won the Damloop in 2012, after winning silver medals in the 5000m at the 2009 and 2011 World Championships.

Japan is represented by Risa Takenaka, the winner of the Gold Coast Marathon in Australia earlier this year.

Among the Dutch runners in the race, Michel Butter will be the man to watch, though he will use the Damloop mainly for his marahton preparations.

“This will be an important test for the Amsterdam Marathon in October, where I should like to qualify for the Olympic Games,” he said. Butter has been training in Kaptagat, Kenya, for the past three weeks.

The Damloop organisers are expecting more than 45,000 runners on Sunday for the 10-mile race, together with 4000 children for the kids’ runs and 12,500 for the race over five miles on Saturday night.

This makes the event the biggest road race in the Netherlands, and the second largest in Europe.