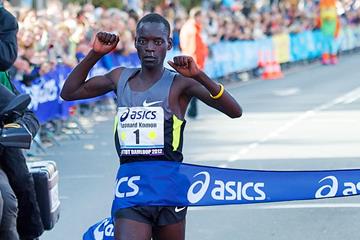 Kenya’s Leonard Komon, the second-fastest man in history over the 10-mile distance, is one of the favourites for the Dam tot Damloop, an IAAF Silver Label Road Race between the city squares of Amsterdam and Zaandam in the Netherlands, held on Sunday (22).

Indeed, Sylvia Kibet might be his main contender in a race where the elite women set off ahead of the men by six minutes and four seconds – the difference between the men’s and women’s course records. There is extra prize money for the first athlete past the finish line.

Komon has won the last two editions of this race, setting his PB and course record of 44:27 in 2011. The 25-year-old still looks back on that rainy September day with disappointment. “Because of the weather, I missed the World best time of 44:24,” he says of the mark set by Haile Gebrselassie in 2005 in another Dutch road race, the Tilburg Ten Miles.

“It was a crazy race,” Komon told the press in Zaandam, two days before his attempt to become the first man to win the Dam tot Damloop three times. “I wanted to beat the women, who were chasing each other. But I was only looking for the record and was struggling with the rain and the wind, and at the end I missed it.”

Komon, who won last year in a world-leading 44:48, says he will make a solid race plan for Sunday. “I will discuss it with my colleagues. I hope we will work together for a good result.”

Among his challengers are three athletes who finished in the top eight in the 10,000m at the IAAF World Championships in Moscow: Abera Kuma from Ethiopia, Kenneth Kipkemboi from Kenya and Nguse Amlosom from Eritrea.

Kuma, the second-fastest man in the world this year over 10,000m, finished third in last year’s edition of the Dam tot Damloop and won the Egmond Aan Zee Half-marathon in the winter.

Peter Kirui was an excellent pacemaker for Patrick Makau when he broke the Marathon World record in Berlin two years ago, but the Kenyan is an accomplished runner in his own right, having won the 2012 New York Half-marathon in 59:39. Like Kipkemboi and Amlosom, this will be Kirui’s debut over 10 miles.

One man who is familiar with this race is Kenya’s John Mwangangi. The 2012 World Half-marathon bronze medallist won this race back in 2010, then set a PB of 45:13 the following year when finishing third behind Komon.

Jesper van der Wielen carries Dutch hopes. The 22-year-old ran 47:03 last year, but has been injured since then, returning in July to finish ninth in the 5000m at the European Under-23 Championships in Tampere.

In the 28 editions of the Dam tot Damloop, where women start ahead of the men, only six times has a woman been the first to cross the finish line. Ingrid Kristiansen of Norway still has the course record with her 50:31 winning time from 1987, although Kenya’s Linet Masai came close in 2009 with her 50:39 to win the overall prize.

In this year’s race, much of the focus will be on the Kibet sisters. Two-time World 5000m silver medallist Sylvia Kibet returns to defend her title after winning last year in 51:42, while her older sister Hilda won in 2010 in 51:30.

Younger sister Valentine, who has a Half-marathon PB of 71:34, will be making her debut at the Dam tot Damloop.

“We have three more sisters and one brother,” said Hilda, who runs for the Netherlands while the rest of the Kibet family represent Kenya. “Two of them are at an American university and they are also talented runners. And another one will be running internationally too in the future.”

Some of the Kibet sisters are coached by Hilda’s Dutch husband, Hugo van de Broek, who is a 2:12:08 marathon runner and lives and trains in Kenya.

Hilda has a Marathon PB of 2:24:27 but she had a disappointing performance at the Rotterdam Marathon in April and in the Olympic Marathon in London last year. “It was difficult to recover, mentally and physically,” she says. “This summer I took a lot of rest. The last couple of weeks it’s getting better and better. I’m preparing for the Frankfurt Marathon, but maybe I can surprise my sisters on Sunday.”

The race will be more than just the ‘Kibet Show’ as Kenya’s Filomena Chepchirchir and Joyce Chepkirui will also be on the start-line.

Chepchirchir last competed at the Dam tot Damloop in 2007 when she finished fourth, but more recently she has gone on to win this year’s Seoul Marathon in 2:25:43 and last autumn she set a Half-marathon PB of 68:06.

Chepkirui, meanwhile, has a Half-marathon PB of 67:03, which was the third-fastest time in the world last year. Last month she won two races in the US, clocking 31:24 over 10km and 36:43 for seven miles.

The Dam to Damloop expects 55,000 runners to complete the course that stretches between Amsterdam and Zaandam, while 16,000 people will walk the distance and a further 6000 will cycle.