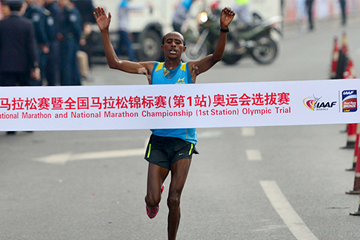 Defending Lanzhou Marathon champion Kelkile Gezahegn will return to the IAAF Gold Label road race on Sunday (10) in a bid to hold on to his title.

The Ethiopian won in Lanzhou last year in 2:11:54 and went on to make it on to the podium in Frankfurt and Rotterdam, reducing his PB each time. He clocked 2:06:56 to finish second in Frankfurt and 2:05:56 to place third in Rotterdam two months ago, making him the fastest in the field for this year’s race.

Gezahegn has a good record in China. Of the 13 marathons he has contested to date, seven have been in China, and he has won all but two of those.

Little separates the top contenders, though, and Gezahegn will have to be at his best to win again.

Ernest Ngeno finished third in Lanzhou last year in 2:12:24, just 30 seconds adrift of Gezahegn. He reduced his PB to 2:06:41 when finishing third in Paris earlier this year and has made it on to the podium in his eight most recent marathons.

Fikadu Kebede, last year’s runner-up, and Samuel Mwaniki, the fourth-place finisher in 2017, will also return to Lanzhou, hoping to improve on their performances from 12 months ago.

Dickson Tuwei and Andrew Kimutai, who clocked PBs of 2:08:22 and 2:08:32 respectively in Seville earlier this year, head to Lanzhou in good form. Azmeraw Bekele, a 2:07:12 at his best, also cannot be discounted.

Girma takes on past winner Kasim

Girma finished second in Lanzhou last year – an improvement on her seventh-place finish from 2016 – and she will be looking to move up another place on the podium in what will be her third Lanzhou appearance.

But she faces a handful of women with significantly faster PBs than hers (2:29:05).

Ashu Kasim won the Lanzhou Marathon back in 2013. Although she didn’t run faster than 2:30 last year, she has bettered that barrier on numerous occasions and her PB of 2:23:09, set when winning the 2012 Xiamen Marathon, makes her one of the fastest women in the field.

Two women share the honour of being the fastest in the field. Gulume Tollesa set a PB of 2:23:06 just eight weeks ago to finish third in Paris. A few months before that, she won the Hongkong Marathon in 2:29:37.

Merima Mohammed has an identical PB to Tollesa, but the Bahraini runner set her best in Toronto back in 2010. In her only marathon so far in 2018, Mohammed clocked 2:27:41 to finish seventh in Nagoya.

The field also includes 2016 Vienna winner Shuko Genemo, Chongqing Marathon champion Meseret Regasa and Kenya’s Mercy Jerotich Kibarus, all of whom own PBs well inside 2:30, suggesting that the course record of 2:31:22, set by Rael Kiyara in 2015, could be under threat.