While the eyes of the athletics world will primarily be focused on the London Marathon this weekend, strong fields have been assembled for many other IAAF Label road races around the world with course records expected to be challenged in Madrid, Gifu and Krakow.

Koech and Insermu among the favourites in Madrid

Nearly 10,000 runners will gather in the Spanish capital to take part in the 42nd Rock ‘n’ Roll Madrid Marathon on Saturday (27) when the top contenders will aim to challenge the course records for the IAAF Gold Label road race.

Koech will be joined by fellow Kenyan Eliud Barngetuny, who won in Madrid last year in a lifetime best of 2:10:15, the second-fastest time ever in the Spanish capital and exactly one minute shy of the course record.

Tadese Tola in the 2016 Bogota Half Marathon

Javier Guerra, the fourth-place finisher at the past two European Championships, is the top Spanish entrant. His 1:03:57 clocking at the Madrid Half Marathon three weeks ago was intended as a stepping stone for Saturday’s event where he is aiming to beat his lifetime best of 2:08:36 set last year in Seville.

No woman has ever bettered 2:30 in Madrid, but that barrier – and the course record of 2:30:40 – look vulnerable ahead of Saturday’s race.

Ethiopia’s Shasho Insermu, world ranked No.40, has finished in the top two in six of her past seven marathons. Her two most recent races have produced the two fastest times of her career as she ran a huge lifetime best of 2:23:28 in Amsterdam in October and followed it with 2:27:42 earlier this year in Xiamen.

Compatriot Tinbit Weldegebril, world ranked No.79 in the marathon, is another top contender. She smashed her PB on her last visit to Spain, clocking 2:23:37 in Valencia in December.

Other Ethiopians include Gebeyanesh Ayele, who clocked a 2:26:54 PB last year in Hengshui, Bechadu Bekele and Hemila Wortessa. With a best of 2:21:31, Magarsa Askale has the fastest PB of the field but that mark was set 11 years ago and she hasn’t raced since 2016.

Seville marathon winner Boulaid Kaoutar of Morocco may also be a factor if she can repeat her 2:25:35 form from last year.

Uganda’s Mercyline Chelangat will be making her marathon debut. The 21-year-old finished a creditable 12th at the 2017 World Cross Country Championships in Kampala and 11th in the 5000m at the 2018 Commonwealth Games.

Weather forecasters are predicting a sunny day with temperatures ranging between 11-13C by the time of the event and no likelihood of rain during the races.

Karoki and Kirwa return to Gifu

Bedan Karoki and Eunice Kirwa, both past winners of the Gifu Seiryu Half Marathon, will return to the IAAF Gold Label road race on Sunday (28).

Karoki, world ranked No.13 in road running, will be aiming to become just the second two-time men’s champion in Gifu. Since his last run in Gifu, Karoki earned world silver medals at cross-country in 2015 and at the half marathon in 2016. He also improved his half marathon PB to 58:42 in 2018 and earlier this year clocked a marathon best of 2:06:48 to finish second in Tokyo.

His main challengers are Eritrea’s Samuel Tsegay, who has a best of 59:21, Abraham Kipyatich, world ranked No.79, and Uganda’s Abdallah Mande, world ranked No.30. Tsegay’s best was recorded back in 2014, but Kipyatich and Mande both set PBs at various distances in 2018 so will likely be bigger threats to Karoki.

Yuki Kawauchi, the 2018 Boston Marathon champion, is the most famous Japanese runner in the field, but national half marathon record-holder Yuta Shitara is the fastest of the domestic entrants. Shitara’s half marathon best is 60:17 recorded in 2017.

Two time Gifu Seiryu Half Marathon champion Eunice Kirwa Jepkirui leads the loaded women’s field. The Olympic marathon silver medallist set an Asian half marathon record of 1:06:46 in Istanbul in 2017 in what was her last race over the distance.

The 2015 world bronze medallist didn’t race at all in 2018, though, and she may need to be at her best if she hopes to win her third title in Gifu.

Joan Melly Chelimo, world ranked No.3 in road running, has the fastest PB of the field. The Kenyan clocked 1:05:04 in Prague last year, making her the fourth-fastest woman in history for the distance.

Ruth Chepngetich, world ranked No.1 in the marathon, heads to Gifu in the form of her life. She won this year’s Dubai Marathon in 2:17:08, the third-fastest time in history, and followed it with half marathon performances of 1:06:09 and 1:05:29.

World marathon champion Rose Chelimo will be aiming to improve on her PB of 1:08:08, while Ana Dulce Felix, Mimi Belete and Gotytom Gebreslase are also in the field.

Course records the target in Krakow

The 19th edition of the PZU Cracovia Marathon taking place in Krakow this Sunday (28) marks the first time that the race has been given IAAF Bronze Label status and appropriately strong fields have been assembled.

Hopes are high that the current course records of 2:11:34 by Berga Birhanu Bekele and 2:28:14 by Tetyana Gamera may be under threat.

Philip Sanga Kimutai is the fastest man in the field. The 35-year old Kenyan has bettered 2:07 three times in his career, topped by 2:06:07 in Frankfurt in 2011 and has achieved podium finishes in multiple major races, including Vienna, Rome and Eindhoven.

Cyprian Kotut on his way to winning the Paris Marathon

Cybrian Kotut could start as the marginal favourite. The Kenyan won the 2016 Paris Marathon in a PB of 2:07:11 and finished third in Frankfurt in 2:07:28 the same year, but this will be a comeback race for him as he has competed since December 2017.

With a best of 2:08:35, Japan's Kentaro Nakamoto might not be the fastest runner in the field, but he is hugely experienced and extremely consistent, having finished in the top 10 at four global championships.

France’s Abraham Kiprotich, world ranked No.75 in the marathon, is another top contender. He won in Daegu in 2013 with a PB of 2:08:33 and followed it with victories in Istanbul and Taipei in 2017.

Kenya’s Josphat Leting, Philip Kangogo and Wycliffe Biwott all stand good chances of making it on to the podium, as does 2016 Krakow runner-up David Metto, who won three marathons last year, including two in Poland.

Kenyan duo Gladys Kipsoi and Eunice Jeptoo will start as the favourites for the women’s race. Kipsoi clocked a PB of 2:27:32 in Houston last year, while Jeptoo has gone even faster, with a 2:26:13 win in Eindhoven in 2017.

Nastassia Ivanova's best of 2:27:24 dates back to 2012, but the Belarusian has competed well in recent seasons, winning in Warsaw in 2017 and 2018 and finishing fifth at the 2018 European Championships. 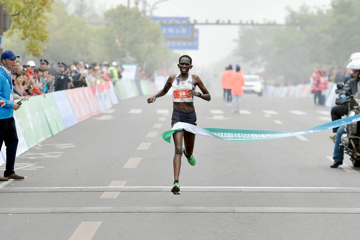