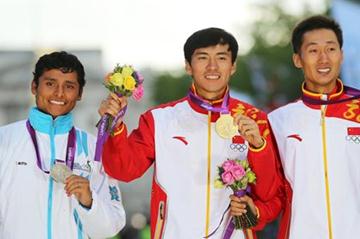 The men’s 20km Race walk could be a thrilling re-match between the main protagonists from the London 2012 Olympic Games, with the top five from that race set to battle again around the streets of the Russian capital.

The big question concerns the form and fitness of China’s Olympic champion Chen Ding, who turned 21 on Monday.

Chen has not finished a race since he made Olympic history by breaking the Olympic record by 13 seconds, and becoming the youngest ever race walking gold medallist at one day short of his 20th birthday.

He started the IAAF Race Walking Challenge race in Taicang in March but failed to finish and he has not competed since.

Chinese officials told local media last week, after naming their team for Moscow, that they do not have high expectations that Chen will be able to fight for the gold medal after a long lay-off following his Olympic triumph and several minor injuries this year.

However, his team mates Wang Zhen and Cai Zelin, third and fourth respectively in London, have been in much better form and could still provide a Chinese presence at the sharp end of the race.

Wang has had two good wins this year over the distance from his two outings, winning the famous Lugano Trophy meeting in March and then returning home to take the honours at the highly prestigious and very competitive National Games, both victories coming in under 1:20.

Cai finished immediately behind Wang at the National Games and finished second in the Taicang race, but China opted for their leading men from London and so did not select the Taicang winner Li Jianbo, although the latter will be on the start line of the 50km.

Erick Barrondo, who became Guatemala’s first ever Olympic medallist in any sport when he finished second in London, has had a hit-and-miss year, either getting disqualified or finishing first.

He got red-carded out of the Lugano Trophy race and the IAAF Race walking Challenge meeting in Rio Maior, Portugal, but won the well-known Dublin race in June, setting a Central American and Caribbean record over 50km when winning in the Slovak spa town of Dudince in March.

Russia’s 2011 World champion Valery Borchin is injured and will not defend his title but, as always, the hosts have three good representatives who will be keen to do well on home territory.

Alexander Ivanov, former World and European junior champion Andrey Ruzavin and 2013 European Cup winner Denis Strelkov could all potentially challenge for the medals although none of the trio have competed at a World Championships before.

Colombia’s 2012 IAAF World Junior Championships winner Eider Arévalo showed that he has no problems holding his own with the seniors when he won the Czech walking ‘classic’ in Podebrady in April, when he clocked a national record of 1:19.45 and he will be looking to improve on that in Moscow.

Also in the Colombian team is the 2011 World Championships bronze medallist Luis Fernando Lopez although the 34-year-old has struggled with injury since the middle of last year, didn’t go to the Olympics, and has been unimpressive in his 2013 outings.

Another record-setter this year is Japan’s Yusuke Suzuki, who set a national record of 1:18.34 when winning the Asian title in Nomi City, Japan, in March.

Suzuke, eighth two years ago in Daegu, will no doubt have learnt something from his London experience when he made the pace at the front during early stages of the race only to unravel and drift back to 36th place.

Norway’s Erik Tysse and Spain’s Miguel Angel Lopez, the latter finishing fifth in London, also have credentials that deserve including them as possible medal contenders.