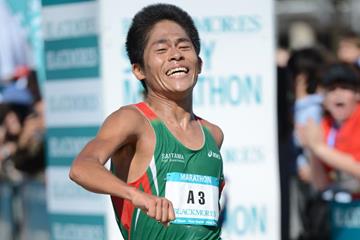 When Yuki Kawauchi last raced the New Taipei City Wan Jin Shi Marathon, it took a course record to beat him. Two years on from that run, the prolific racer from Japan will return to the IAAF Silver Label road race seeking not only victory but an improvement on the course record on Sunday (18).

Since then, Kawauchi has gone on to win several other marathons and place ninth at last year’s World Championships. This will be his third marathon of the year, following victories in Massachusetts in January and Kitakyushu last month.

Course record-holder Chebor will also return to New Taipei City, but the 35-year-old’s recent form hasn’t been quite as convincing as Kawauchi’s. Of the three marathons he contested last year, his fastest time was 2:16:08, almost eight minutes shy of his PB.

Sylvester Teimet, however, could be Kawauchi’s biggest threat. With a best of 2:06:49, the 33-year-old Kenyan is the fastest runner in this year’s field. Although his lifetime best was set eight years ago, he ran 2:11:00 as recently as last year. His last victory, though, was in Shanghai in 2012.

As with the men’s contest, the course record-holder will return in the women’s race.

Kim Ji Hiyang of the DPR of Korea won in New Taipei City in 2014. Competing as an U20 athlete and making her marathon debut, the then 18-year-old crossed the line in 2:34:52, which remains the course record.

Kim has since improved her PB to 2:28:06, but she may have to reproduce that kind of form if she hopes to win on Sunday as she will be up against Rael Kiyara Kguriatukei.

The Kenyan has a best of 2:25:23, which makes her the fastest woman ever to enter the New Taipei City Marathon. Her PB was set seven years ago, but she came within a minute of it last year when winning the Chongqing Marathon in 2:26:22.

Compatriot Chemutai Rionotukei is another leading contender. The 31-year-old set a personal best of 2:26:30 in Dongying last year and won in Taiyuan in September.