Defending champions Mary Keitany and Lelisa Desisa are back in the Big Apple to chase more glory at the TCS New York City Marathon on Sunday (3), an IAAF Gold Label road race.

With calm, cool and sunny conditions forecast for Sunday, there’s every chance she could take down Margaret Okayo’s course record of 2:22:31. The 37-year-old clocked 1:07:58 to finish fourth at the Great North Run in September on her last outing, and history has shown that when the Kenyan arrives in New York at full fitness, she is incredibly difficult to beat. She clocked 2:20:58 to finish fifth in her most recent marathon in London back in April.

“I trained well so I’m ready to tackle this race,” Keitany said at the pre-race press conference on Thursday. “I’m not saying I am going to run a good time but I’m ready to defend my title. I’ll run my own race.”

In terms of her overall wins, Keitany said she is keen to close the gap on Norway’s Grete Waitz, who stands alone with nine victories in this race. Her chief threat is likely to come from Ethiopia’s Ruti Aga, who holds the second fastest PB in the race with 2:18:34.

The 25-year-old was a surprise entrant in the marathon at the IAAF World Athletics Championships in Doha in late September given she had signed up for New York several months ago, but in hot conditions she dropped out before the 15km mark. She ran her PB to finish second at the Berlin Marathon last year and earlier this year she claimed her first Abbott World Marathon Major, clocking 2:20:40 in Tokyo.

An intriguing debutante is Kenya’s Joyciline Jepkosgei, the 25-year-old who holds the half marathon world record at 1:04:51, which she set in Prague in 2017. Though this will be her first try at this distance, she has some experience on the rolling hills of Central Park, having taken victory at the New York City Half Marathon in March in 1:10:06. She also had a taste of being part of a big city marathon when she acted as a pacemaker at the London Marathon earlier this year.

There is unlikely to be a repeat of the US winner we saw in 2017, when Shalane Flanagan outran Keitany in the closing miles through Central Park, but Sara Hall and Desiree Linden appear to hold the best chance of a podium finish for the home contingent. Hall clocked a huge PB of 2:22:16 in Berlin in September while Linden, last year’s Boston Marathon champion, is a consistent world-class performer who rarely runs a bad race.

Australia’s Sinead Diver is another worthy of huge respect. The Irish-born athlete smashed her personal best to clock 2:24:11 in London earlier this year and showed her preparations have gone well with a 25-second PB in the world 10,000m final in Doha five weeks ago, in which she finished 14th.

The men’s race looks a wide-open affair, with Ethiopia’s Lelisa Desisa trying to complete a swift double over the distance, having taken gold in the marathon at the World Championships in Doha just four weeks ago.

The 29-year-old has a PB of 2:04:45 that dates back to 2013, and while that may not be world-beating in the current marathon climate, in races like this – with a hilly course and no pacemakers – Desisa is a formidable player. He clocked 2:05:59 to win here last year and in April he finished a close second at the Boston Marathon, just two seconds behind winner Lawrence Cherono.

“After Doha I tried to take recovery training,” said Desisa. “The marathon is not easy but I said I would see [how] my body [was] and if it’s okay. Winning New York before changed my life, changed my future. I don’t know what will happen but I will try my best.”

Geoffrey Kamworor, the 2017 champion, is also back and the Kenyan will be keen to go one better than his runner-up finish last year. He arrives off the back of a stunning preparation, having set the half marathon world record at 58:01 in Copenhagen back in September.

On Thursday he confirmed preparations went well at his base in Kaptagat, where he has been training alongside his close friend and mentor Eliud Kipchoge. “I did what I normally do to run a marathon,” he said. “I think I’m ready.”

Ethiopia’s Shura Kitata looks primed to eventually take victory at a Marathon Major, and this may present an ideal opportunity for the 23-year-old, who has a best of 2:04:49. Tamirat Tola is another who can’t be discounted, a fourth-place finisher here last year who finished sixth in London back in May, clocking 2:06:57. He clocked 59:13 for the half marathon to finish second behind Mo Farah at the Great North Run in September. 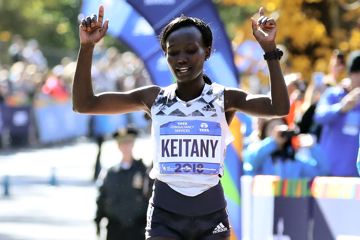 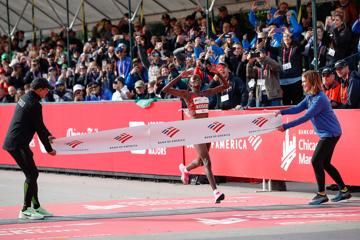