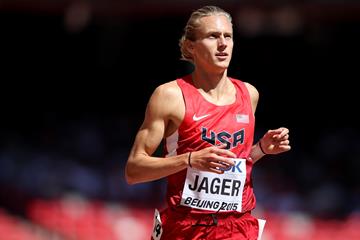 Based on Evan Jager's recent victory in the IAAF Diamond League in Monaco in 8:01.29, the fastest time of the year, the US athlete could become the first non-Kenyan winner of the 3000m steeplechase at a World Championships since Saif Saaeed Shaheen in Helsinki 2005.

Such is the East African nation's dominance in the event – aside from Shaheen's victory for Qatar in 2003 and 2005 – a Kenyan has won every edition of the championships since 1987. However, after taking Olympic silver in Rio last year, Jager will be bidding to become the first US steeplechaser to collect a World Championships medal.

Certainly, a Kenyan sweep – achieved in 2015 and 2007 – is looking less likely given the uncertainty surrounding Olympic champion Conseslus Kipruto, who had to drop out of last month's race at the IAAF Diamond League meeting in Lausanne because of a painful ankle, and made a late decision not to start in Monaco.

However, given the country's strength in depth in this event, you would never want to bet against Kenya maintaining its stranglehold. Their two-time Diamond Trophy winner Jairus Birech placed second in Monaco in a season’s best of 8:07.68, suggesting he is coming into form at the right time. 2007 gold medallist Brimin Kipruto and four-time world champion Ezekiel Kemboi – benefiting from a wild card by virtue of being the defending champion – complete the Kenyan quartet.

Fourth in the Olympics last year, Morocco's Soufiane Elbakkali has also shown good form in 2017, with two 8:05 clockings to his name from the IAAF Diamond League meetings in Rome and Rabat respectively, each time winning by comfortable margins.

Jager's US compatriot Stanley Kebenei clocked a personal best of 8:08.30 for third in Monaco, showing he, too, could be a force to be reckoned with.

Other contenders include Eritrea's world U20 silver medallist Yemane Haileselassie, the Ethiopian trio Getnet Wale, Tafese Seboka and Chala Beyo, and you can never rule out three-time Olympic medallist and twice world medallist Mahiedine Mekhissi of France from producing his best when it matters most.