Weekend road preview: Chemutai and Kipkirui clash in Prague, Gudeta takes on Chepngetich in Istanbul, Kimetto lines up in Daegu

An assault on the Italian all-comers record and the 2:07 barrier is the target at the 19th edition of the Generali Milano Marathon, an IAAF Silver Label road race, on Sunday (7).

Kenyan Edwin Koech, 27, will return to Milan where he won in 2:07:13 in 2017, setting the Italian all-comers record on the fast and flat Milan course. The field of Kenyan top runners also features Titus Ekiru, who won the Seville Marathon in 2:07:43 in February 2017.

The pre-event favourite in the women’s race is defending champion Kenyan Vivian Kiplagat, who won last year in 2:27:08. Kiplagat will face Kenyan Doris Changeywo, who finished third in Milan last year with 2:29:49.

“We are aiming at a sub-2:07 time for the first time in an Italian marathon race,” said race director Andrea Trabuio. “The course has undergone some minor changes with the goal to make it faster.”

A record 7293 runners have entered.

Chemutai and Kipkirui set to renew rivalry in Prague

Five men with personal bests inside 60 minutes and two of the fastest women in history will line up for the Sportisimo Prague Half Marathon, an IAAF Gold Label road race, on Saturday (6).

Stephen Kiprop, who won this year’s RAK Half Marathon in a world-leading 58:42, leads the men’s field. The 20-year-old made his half marathon debut last year with 59:44 and went on to run two more sub-60-minute times.

He warmed up for Prague with a 10,000m race in Kenya three weeks ago, finishing just a whisker behind Benard Kimeli, who will defend his title in Prague.

Fellow Kenyans Felix Kibitok, Abel Kipchumba and Geoffrey Koech – all sub-60-minute performers at their best – are also expected to challenge.

Kenya’s Fancy Chemutai and Caroline Kipkirui, the second and sixth-fastest women in history with respective PBs of 1:04:52 and 1:05:07, will clash in the women’s race.

European 10,000m champion Lonah Chemtai Salpeter will be one of their main challengers, having won the recent Roma-Ostia Half Marathon in 1:06:40.

Gudeta to take on Chepngetich at Istanbul Half

World champion Netsanet Gudeta will be the headline act at the Vodafone Istanbul Half Marathon, an IAAF Gold Label road race, on Sunday (7).

The 28-year-old Ethiopian set the women's-only race world record at the World Half Marathon Championships in Valencia last year, clocking 1:06:11. But she's run even faster since, clocking 1:05:45 to equal the Ethiopian record at the RAK Half on 8 February, where she finished second. More recently, she ran 1:06:49 at the Bahrain Night Half Marathon on 15 March to finish third.

She'll face Ruth Chepngetich, who set the Istanbul course record of 1:06:19 in 2017. She was second in the Bahrain race last month, clocking 1:06:09 to clip ten seconds from her personal best. Chepngetich began 2019 with a bang, winning January's Dubai Marathon in 2:17:08 to become the third fastest marathoner in history.

Other standouts include Ethiopians Bekelech Gudeta and Helen Tola, who have 1:07:03 and 1:07:47 lifetime bests to their credit; and Kenyan Delvine Meringor, another sub-1:08 runner.

He'll be backed up by compatriots Amdework Walelegn, who clocked 59:22 in New Delhi last year, and set the Istanbul course record last year in 59:50.

Aziz Lahbabi of Morocco also has solid credentials, with a 59:25 lifetime best from 2014.

Kenya's fastest entrant is Peter Kwemoi, a 59:58 man who won this year's Verona Half Marathon.

The leading contenders for this year’s NN Marathon Rotterdam will try to improve the course record of 2:04:27 at the IAAF Gold Label road race on Sunday (7).

Kenya’s Marius Kipserem will start as the slight favourite. He won the Abu Dhabi Marathon in December in 2:04:04, but his time cannot be counted as an official PB because it was later found that the course was slightly short. That in itself, though, will act as a huge motivating factor for the 30-year-old as he seeks to improve on his fifth-place finish from Rotterdam last year.

Ethiopia’s Tsegaye Mekonnen and Markos Geneti have sub-2:05 PBs, while Emanuel Saina and Woldaregay Gezahegn Kelkile are also strong competitors. Josphat Kiptoo Boit, who burst on to the road-running scene last year with half-marathon clockings of 59:19 and 59:42, will be making his marathon debut.

Dutch record-holder Abdi Nageeye and European champion Koen Naert of Belgium will be aiming to break their respective PBs of 2:08:16 and 2:09:51 or at least secure the Olympic qualifying mark of 2:11:30.

Having won the Valencia Marathon last year in 2:21:14, Ethiopia’s Ashete Bekele Dido will start as favourite in the women’s race. Compatriot Sentayehu Lewetegn and Kenya’s Stella Barsosio are both sub-2:24 performers and are expected to challenge for top honours.

USA’s Kellyn Taylor, Ethiopia’s Betelhem Moges and Portugal’s European half marathon champion Sara Moreira should also be in contention for the podium places.

Approximately 17,000 runners will take to the Erasmus Bridge for the start of the race on Sunday with temperatures expected to be about 14C.

Nancy Kiprop says she is ready to make history at the 36th edition of the Vienna City Marathon on Sunday (7) by becoming the first woman to win the Gold Label road race for the third time.

The Kenyan, who triumphed at this race the past two years, has arrived in the kind of form which makes her believe that she can improve on her best of 2:22:46, a performance that would fall well under the current course record of 2:23:47, set by the Italian Maura Viceconte in 2000.

“I’m excited to be here once again and am really going for a personal best," said Kiprop, who set her current best in Frankfurt last October. "I’d be really happy if I can run around 2:22 or 2:23 and that would be a great achievement for me.”

But Kiprop concedes that the one factor which can play havoc with any record attempt is the Viennese weather. “Vienna is a perfect course but the challenge is the weather. Sometimes it is very warm but the course is perfect.”

But the Kenyan should face strong opposition from Ethiopia’s Rahma Tusa, a three-time winner of the Rome Marathon, whose best is 2:23:46.

Making good progress up the marathon charts is Nancy Kiprop’s fellow Kenyan, Angela Tanui. Her best is 2:26:31 and she ran 69:53 to win the Naples Half Marathon in late February.

Another previous winner expected on the start line is Swiss record holder Maja Neuenschwander, the winner in 2015 and clocked her best of 2:26:49 in Berlin later that year. She'll be returning to action after a stress fracure sidelined her from competition last year.

Korir and Rono return to Daegu

Korir clocked a lifetime best of 2:06:35 in the Korean city 12 months ago, which would have been a course record had he not been beaten by six seconds by Abraham Kiptum. The 32-year-old will be highly motivated to go one better than last year, but he faces an incredibly strong field that includes fellow Kenyan Dennis Kimetto.

Since breaking the world record in 2014, Kimetto has withdrawn from more marathons than he has completed. Beset by injuries to his quadriceps, groin and triceps, the 35-year-old ran 2:14:54 in Shanghai last year, his first completed marathon since his 2:11:44 clocking in London in 2016.

It may be some way off his 2:02:57 lifetime best, but Kimetto is hopeful that the worst of his injury worries are now behind him and that he can return to challenging for top honours at major marathons.

There are nine men in the field with sub-2:07 lifetime bests and four of them have PBs quicker than the Daegu course record of 2:06:29: Ethiopia’s Shifera Tamru, who clocked 2:05:18 in Dubai earlier this year, three-time Houston Marathon winner Bazu Worku, three-time Amsterdam winner Wilson Chebet and evergreen Kenyan Mark Kiptoo.

Defending champion Janet Rono will face two other past Daegu winners on Sunday.

Rono won in Daegu last year in 2:28:01, and although her PB is a couple of minutes quicker at 2:26:03, she will start as the third-fastest athlete in the women’s field.

Ethiopia’s Meseret Mengistu set her PB of 2:23:26 when winning the 2015 Paris Marathon. She hasn’t bettered 2:25 since then, but has won in Beijing and Xiamen in recent years. Compatriot Medina Deme Armino arrives in Daegu in good form, following her 2:27:25 PB victory in Xiamen in January.

The closely-matched fields for the HAJ Hannover Marathon suggest both the men’s and women’s contests will be highly competitive at the IAAF Silver Label road race on Sunday (7).

Karolina Nadolska is the fastest of the entrants in the women’s field. The Pole clocked her 2:26:32 PB in Osaka in 2014, but was a few minutes shy of that mark in Nagoya last year where she ran 2:30:46.

The field also includes Ethiopia’s Tigist Memuye Gebeyahu, whose biggest career win came two years ago in Zhengzhou when she clocked 2:27:39. Kenya’s Racheal Mutgaa, who ran 2:28:39 to finish second in Hefei last year, will also be among the favourites.

Germany’s Anja Scherl, a 2:27:50 performer at her best, is returning from injury but appears to be in good form as shown by her 1:12:43 run at the Barcelona Half Marathon in February.

Ayele and Tsega look to maintain Ethiopian dominance in Rome

Ayele is the fastest man in the field, having clocked 2:06:45 in Dubai in 2016, just a few months before finishing fourth in a memorable race at the IAAF World Half Marathon Championships.

Italy’s 2014 European marathon champion Daniele Meucci will be returning to the race for the first time since making his marathon debut in 2010. He will be joined by compatriot Ahmed Nasef.

Tsega’s 2:25:48 clocking from the 2018 Shanghai Marathon makes her the fastest in the women’s field. The 22-year-old, who clocked 2:27:36 in Dubai earlier this year, will face compatriots Asnakech Mengistu, Megertu Alemu and Mestawot Tadesse.

Layla Soufyane, who has a career best of 2:32:10, is the fastest Italian woman in the field and will be contesting her first marathon since her maternity leave.

About 10,000 runners have registered for the marathon, which starts and finishes in the Via dei Fori Imperiali.

Race records under threat in Madrid

Several athletes in the line-up for the Madrid Half Marathon appear capable of breaking the race records of 1:01:54 and 1:09:40 on Sunday (7) in what will be the event’s first year as an IAAF Bronze Label road race.

He will face stiff opposition from Kenya’s Emmanuel Kipsang, Kipkemoi Kiprono and Bernard Kiprop Kipyego. Kipsang and Kiprono have sub-1:01 PBs, but managed 1:02:24 and 1:03:38 at the Rome-Ostia Half Marathon four weeks ago. Kipyego is the 2009 world half marathon silver medallist and has a best of 59:10 but hasn’t bettered 1:01 since 2014.

Uganda’s Daniel Rotich set his 1:00:59 PB in 2016 and should be in contention for a podium place, as will South Africa’s Desmond Mokgobu. Spanish hopes rest with Javier Guerra, a 1:01:18 athlete who will use Sunday’s event as a build-up for the Madrid Marathon later this month.

Italy’s Sara Dossena, who set a big PB of 2:24:00 at the Nagoya Marathon four weeks ago, will be trying to prevent an Ethiopian victory and looks capable of breaking her PB of 1:10:10. Morocco’s Soukaina Atanane and Burundi’s Elvanie Nimbona should also feature among the lead pack.

More than 20,000 runners will take part in the event on what looks set to be a cold and possibly wet day in the Spanish capital.

Local stars on show in Pyongyang

That performance was a PB for Jo, also 26, who has run consistently in her country's biggest marathon, winning in 2017 and finishing third in 2016. She's raced well internationally as well, finishing fourth at last year's Asian Games.

On paper the fastest in the field is Kenyan Emily Samoei, but her best of 2:26:52 came back in 2012, form she'll need to chase to finish back on the podium on Sunday.

Others to watch include Tizita Terecha of Ethiopia, who has a 2:28:02 career best from 2015, and her 27-year-old compatriot Tadelech Nedi, who clocked 2:32:28 in Casablanca two years ago. 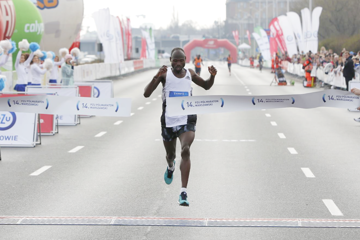