The dozen overseas runners invited to Japan’s oldest continuous marathon all have personal bests under 2:10, three of those under 2:07.

Ndirangu is not among those, but he will be a favourite after winning last year in 2:07:53 when making his debut over the distance. More recently, the 24-year-old Kenyan improved his 10,000m personal best to 27:33.55 in October, lopping 10 seconds from his previous lifetime best. If he successfully defends, he’ll be the first back-to-back winner since Martin Fiz who triumphed in 1999 and 2000.

The fastest runner in the field is Ethiopian Deribe Robi, who clocked 2:05:58 in 2015. More recently, he ran 2:07:33 at the Valencia Marathon in December. The next fastest is Ugandan Stephen Kiprotich, the 2012 Olympic and 2013 world champion, who recorded his personal best of 2:06:33 in the 2015 Tokyo Marathon. He’s clocked 2:07s in three of his last four marathons, so like Robi, Kiprotich will arrive capable of producing another 2:07 performance. Kenyan Ernest Ngeno, who clocked 2:06:41 at last year’s Paris Marathon where he finished third, rounds out the sub-2:07 entrants.

Seurei, a former Kenyan now representing Bahrain, was a 3:31.61 1500m standout before moving up straight to the marathon in 2017. He ran his PB in Valencia last December. Sulle, the Tanzanian record holder, joined the sub-2:08 ranks at last year’s Toronto Waterfront Marathon. While Seurei and Sulle have limited experience over the distance Mokoka has run more than a dozen marathons during his long career. The 33-year-old South African clocked his personal best in 2015, but has produced sub-2:09 runs in both 2018 and 2017.

For the Japanese men, the race is the last realistic chance to qualify for the Marathon Grand Championships (MGC), the Japanese Olympic marathon team trials. Twenty-eight runners, including Kenji Yamamoto and Yuki Kawauchi who are entered here, have already qualified for the MGC. But for the other invited runners, including 2016 Olympian Satoru Sasaki, qualification is the primary goal. It should be noted that marathon and ekiden powerhouse Asahi Kasei has yet to qualify a runner for the MGC. Satoru Sasaki will be aiming to change that.

Ethiopia’s Guye Adola from Ethiopia and Lonah Chemtai Salpeter from Israel lead the field at the Huawei Roma-Ostia Half Marathon, an IAAF Gold Label road race, on Sunday (10).

Adola made a major breakthrough at the 2017 Berlin Marathon, when he ran the fastest ever time for a debutant with an impressive 2:03:46 performance to finish just 14 seconds behind Olympic champion and world record holder Eliud Kipchoge.

Guye Adola at the Berlin Marathon

His top rivals will include Kenyan Geoffrey Yegon, who has a 59:44 PB from 2016 and more recently finished second at last year’s Prague Half Marathon in 59:56. Three other Kenyans are also expected to contend: Emmanuel Kipsang, who has clocked a lifetime best of 1:00:14 and finished fourth at this race last year; Kiprono Kipkemoi, who ran 1:00:56 in Lisbon 2018; and prolific racer Cornelius Kangogo, a three-time winner of the Corrida de Houilles and two-time champion at the Media Blenio in Dongio.

The Italian challenge is led by 2014 European marathon champion Daniele Meucci, who is returning to his best form after a tough 2018 season. He’ll be joined by Stefano La Rosa, who has a marathon PB of 2:11:08 set in Seville in 2018.

Salpeter came to the fore last summer when she won the European 10,000m title, and has continued to impress. Last November Chemtai broke the Israeli national marathon record with a 2:24:17 run in Florence. A month earlier she produced her half marathon best, clocking 1:07:55 in Lisbon.

Haftamnesh Tesfay Haylu won here last year in 1:09:02 and returns to defend her title. She’ll also face Kenya’s Antonina Kwambai, who clocked 1:08:07 at the Paris Half Marathon in 2018 and her compatriot Diana Chemtai Kipyogei, who set her lifetime best of 1:07:07 in Valencia last October.

Anna Incerti, the 2010 European marathon champion, and Valeria Straneo, the marathon silver medallist at the 2013 World Championships, are the top Italians in the field. Incerti won this race twice, in 2009 and 2011.

Jemeli is the fastest in the field with a 2:20:53 personal best, while Jepkesho arrives with a lifetime best of 2:21:37.

Jemeli has been a very consistent runner, finishing among the top three in her last four marathons, running under 2:23 on each occasion. She’ll arrive in good form, on the heels of a 1:06:14 personal best from February’s RAK Half Marathon. Jepkesho’s recent record is also impressive, winning two of her last four marathons in under 2:24. In the other two, she served as a pacesetter.

Monica Jepkoech, another top contender, set her best of 2:24:31 in Seoul last year. With the exception of Nagoya in 2017, she has finished among the top three in her last five marathons.

Other top runners from abroad include Meseret Defar and 2018 Commonwealth Games champion Helalia Johannes. Defar is, of course, one of the greatest track runners in history, having won two Olympic and World Championship gold medals at 5000m. The Ethiopian, now 35, made her marathon debut at the 2018 Amsterdam Marathon, finishing eighth in 2:27:25. It wasn’t an impressive run, considering her 10,000m best of 29:59.20 and a half marathon best of 1:06:09, albeit on an aided course in South Shields, UK, thus her second marathon is an eagerly awaited one.

For the seven invited Japanese runners, the race is essentially the last realistic chance to qualify for the Marathon Grand Championships (MGC), the Japanese Olympic marathon team trials. Runners can qualify for the MGC in any record eligible race before 30 April, but must run under 2:24. So far only nine women have met the threshold.

Kayoko Fukushi, who dropped out of the Osaka Women’s Marathon in January, is back for one more try. Fukushi is Japan’s best track runner, still holding the national records at 3000m, 5000m and the half marathon.

Miyuki Uehara is also attracting attention. A rising star on the track with bests of 15:21.40 and 31:38.80 at 5000m and 10,000m, the 23-year-old contested the shorter distance at the 2016 Olympics and the longer at the IAAF World Championships London 2017. Uehara made her marathon debut in Berlin last September, finishing ninth in 2:25:46. Her second marathon is awaited with much anticipation.

"My training went better than before the Berlin Marathon.," Uehara said. "I will make sure to qualify for the MGC."

Reia Iwade, the third fastest among Japanese entrants at 2:24:38, has already qualified for the MGC.

"I will run aggressively like (Yuki) Sato did in Tokyo," Iwade said. "My goal is to win with a personal best."

A powerful Kenyan armada will try to better the men’s race record of 2:07:30 at the Zurich Barcelona Marathon, an IAAF Bronze Label road race, on Sunday (10).

Organisers have redesigned the course to soften both the early stages and the closing kilometres which have now gentler slopes.

Defending champion Anthony Maritim will try to succeed again but his lifetime best of 2:08:08 set here last year might not be enough. The fastest man in the field is Eliud Kiptanui, holder of a 2:05:21 PB set in Berlin 2015. He’s hoping to improve on his last effort of 2:14:15 in Xiamen last January to be in the hunt for victory.

Race record holder Jackson Kotut will also be in contention although the 31-year-old Kenyan has not run under 2:10 since 2010, his last outing being a 2:13:08 run from Casablanca last October. Other Kenyans in contention include Laban Mutai (2:07:38) and Philemon Kacheran (2:09:13).

The Ethiopian challenge will be led by the in-form Abebe Negewo, fresh from a runner-up finish at the Barcelona Half Marathon four weeks ago. The 31-year-old will try to improve on his lifetime best of 2:08:41 while his compatriot Limeni Getachew, holder of a 2:06:49 PB, should also be a factor.

With a race record the goal, four pacemakers have been employed to better 2:07:30. Sammy Niokaye will take the field through the first half, with fellow Kenyan Ezekiel Chepkorom taking over until 25 kilometres and Ezekiel Mutai and Roland Korir forging on until the 30km checkpoint.

In the women’s contest, Kenya’s Jackline Chepngeno will be the athlete to beat. The 26-year-old is the fastest in the field thanks to her 2:24:38 performance in Amsterdam last October. Three other runners in the field have gone under 2:30, all from Ethiopia: Aberash Fayesa (2:27:04), 2018 Malaga Marathon winner Meseret Abebayehu (2:29:14) and Tigist Teshome, winner in Castellón last year in a lifetime best of 2:29:57.

Kenya’s Michael Mutai and Spain’s Marc Roig - the pacemaker who led Florence Kiplagat to her half marathon world record performances in 2014 and 2015 in Barcelona – have been asked to inject a rhythm quick enough to threaten Helen Tola Bekele’s race record of 2:25:04 set in 2017.

A record 17,465 entrants representing no fewer than 107 countries will take part in Sunday’s event, with France (2137) and Great Britain (1232) the most represented after Spain. Overall, 49 percent of the athletes will arrive from abroad and 20 percent are women.

The forecast calls for pleasant and sunny conditions, with temperatures between 12-14 at the start with neither rain nor wind likely. 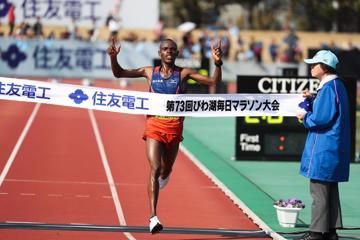 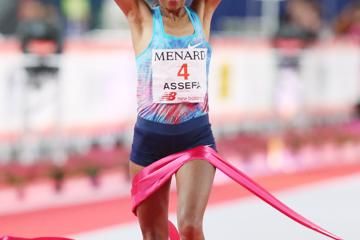 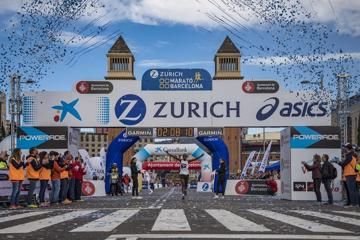 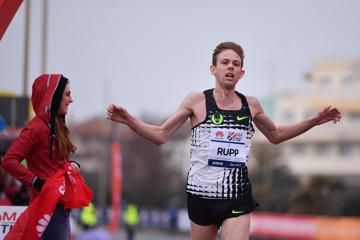