Losing the men's world record to Valencia last year was impetus for organisers to this year attract a men's field that includes 21 runners with personal bests of under 1:01 and ten in the women's field who have dipped under 1:10.

Kiptanui (road running world rank: 9) made his debut over the distance in this race last year, winning in 1:00:05, and went on to improve to 58:42 in Berlin one month later.

"My goal is to do my best and win again," Kiptanui said. He added that he wasn't targeting Abraham Kiptum's 58:18 world record set in Barcelona last October.

But there are more athletes in this race who can produce some surprises. Ethiopia comes armed with Mosinet Geremew (marathon world rank: 4), winner of the 2018 Dubai Half Marathon with a 59:11 lifetime best from 2014, and Betesfa Getahun (road running world rank: 35), who has a 1:00:26 personal best. He was third in the Barcelona Half Marathon last month.

"I'm in better shape this year," said Kosimbei, who was fourth here last year. "I hope to improve my place from last year, because in 2018 the weather was not so good to the runners."

In the women's field, Cheruyiot (marathon world rank: 3), the 2016 Olympic 5000m champion, is the undisputed star of the field. The 35-year-old, who also won three world titles on the track and the 2017 London Marathon, was second in this race last year clocking 1:09:44. She clocked 1:07:43 at last year's Great North Run to win that event for the second time.

"I’ve trained well, I intend to test myself on Sunday before the London Marathon," Cheruiyot said. So I hope to run well and improve my personal best, so I expect to get the podium. I hope it will be the first place."

Masai is also using the race as a tune-up prior to next month's London Marathon. "I’m in good shape and I intend to do my best next Sunday, a test also before my next marathon in London."

Moen set for half marathon return in Gdynia

After an injury-affected 2018, Norway’s Sondre Nordstad Moen (road running world rank: 111) is back in good form and will test himself at the Gdynia Half Marathon on Sunday (17), an IAAF Bronze Label road race that will double as the test event for the IAAF World Half Marathon Championships Gdynia 2020.

Last month the 28-year-old finished second at the Monaco 5km in a national record of 13:37. This weekend’s race will be his first half marathon and longest race – excluding his withdrawal from the European Championships marathon last year – since setting a national half marathon record of 59:48 in Valencia in 2017.

Fellow Kenyan Wycliffe Biwott should also be among the leading challengers. The 31-year-old focused solely on the marathon last year, but set his half marathon PB of 1:01:18 in his last race over the distance in 2017 and has finished on the podium in 22 of his past 24 outings across all events.

Marcin Chabowski leads the domestic charge. The 2005 European U20 steeplechase champion will be looking to improve on his sixth-place finish from last year. Compatriot Krystian Zalewski, another steeplechaser, will be making his half marathon debut.

In the women’s race, Christine Moraa Oigo will defend her title. Before winning in 2018, the Kenyan had finished second in Gdynia in 2016 and 2017. But her lifetime best of 1:11:32, set in Podgorica in 2017, makes her just the second-fastest woman in the field.

Ethiopian newcomer Maeregu Shegae clocked 1:10:52 on her debut at the distance last year but then finished more than five minutes adrift of that mark in Copenhagen six months later.

Compatriot Genet Gashie will also contend for a podium place. She clocked a PB of 1:11:52 last year and recently finished second in Split with 1:13:27.

The strongest fields ever assembled for the New Taipei City Wan Jin Shi Marathon will be gunning for race records at this IAAF Silver Label event's 19th edition on Sunday (17).

On the men's side, four entrants with sub-2:10 credentials will be on the start line targeting the 2:13:05 standard set by Kenyan Josphat Too in 2013.

Among the favourites is Kenyan Mike Mutai, the winner of the 2016 Hong Kong Marathon who also boasts podium finishes from marathons in Singapore, Hangzhou and Hefei. Mutai, 36, clocked his 2:09:18 lifetime best in Dubai in 2012.

Another contender is Ethiopian Abraham Girma whose 2:06:48 personal best set in 2012 makes him the fastest in the field. More recently, he clocked 2:12:46 in Porto last November, finishing fifth.

A third contender is Philip Kangogo of Kenya, who set his 2:08:16 lifetime best when winning the 2015 Barcelona Marathon in his debut over the distance.

Similarly in the women's race, five women with sub-2:30 credentials have been recruited to set their sites on Kim Jong-hyang's 2:34:53 race record set in 2014.

He Yinli (marathon world ranking: 164) of China is the fastest in the field with a personal best of 2:27:35 set at the 2015 Chongqing Marathon where she's finished on the podium twice. She clocked 2:31:14 at the Osaka Women's Marathon in January, her most recent race.

Kenyan Nancy Koech (marathon world ranking: 318) is another contender. She arrives armed with a 2:29:30 career best set at the 2017 Daegu Marathon, with wins at the Malaga, Copenhagen and Munster marathons to her credit.

Another contender is Ethiopian Amente Sorome Negush (marathon world ranking: 268), whose 2:29:46 came at the 2017 Florence Marathon.

The field also includes Japanese runner Hiroko Yoshitomi (marathon world ranking: 223), who's been called a female version of prolific marathoner Yuki Kawauchi. The 35-year-old set her 2:30:09 personal best in Fukuoka last November. On Sunday she'll be running her third marathon in as many weekends. On 3 March she clocked 2:32:3o in Tokyo and 2:34:49 a last Sunday in Nagoya.

The start time forecast calls for some light rain and cool conditions. 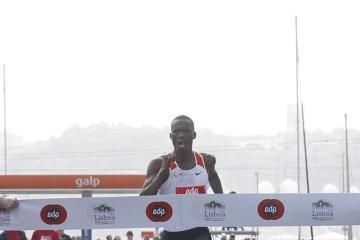 Kiptanui and Woldu beat the winds at Lisbon H... 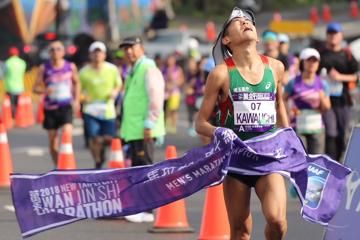