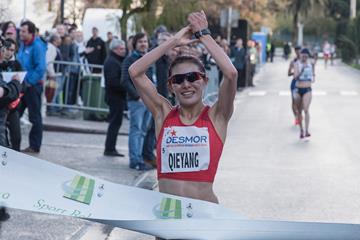 China’s Qieyang and Cai the favourites in Rio Maior

Qieyang Shenjie, the 2012 Olympic 20 km silver medallist and Cai Zelin, the Olympic silver medallist over the distance four years later, are the leading contenders at the 28th Race Walking World Cup in Rio Maior on Saturday (6).

The Portuguese city, which has produced several of the country’s most famous racewalkers including world and European 50km champion Inês Henriques and 2013 world 20km bronze medallist João Vieira - both of whom will compete this weekend - is the first European leg of the 2019 IAAF Race Walking Challenge.

Also among the starters is Ethiopian Yehualey Mitiku Beletew (1:31:58), the 2016 African Championships runner-up over 20km.

But the field doesn’t end there.