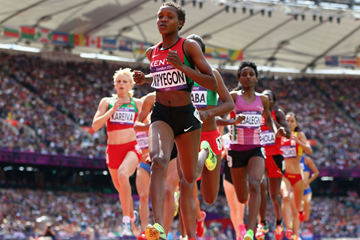 She broke the world 1500m record little more than a year ago, but Genzebe Dibaba won’t be heading to Rio as the favourite in her specialist event.

She had to abort her outdoor season debut, completing 3000m of a 5000m race in Barcelona, but she managed to complete a 1500m race nine days later in the same city, clocking 3:59.83 in what was largely a solo effort.

Even if she makes it to the start line in one piece, Dibaba has shown nothing to suggest that she is in the same form as she was last year.

Instead, the leading contender appears to be Kenya’s Faith Kipyegon. Undefeated this year, the 22-year-old has moved up a notch since taking silver behind Dibaba at the IAAF World Championships Beijing 2015, winning at the IAAF Diamond League meetings in Shanghai and Eugene with respective times of 3:56.82 and 3:56.41, both national records. She also won the mile in Oslo in 4:18.60.

Like Dibaba, world bronze medallist Sifan Hassan has had some injury troubles this year. The Dutch runner won the world indoor 1500m title back in March, but was convincingly beaten at the IAAF Diamond League meeting in London and at the European Championships.

Britain’s Laura Muir was the victor in the British capital, breaking Kelly Holmes’ national record with a time of 3:57.49, putting her second on the 2016 world list. The fearless racer won’t be afraid to take on the likes of Dibaba and Kipyegon.

Poland’s Angelika Cichocka won the European title last month in a slow, tactical race. Previously considered to be more of an 800m runner, Cichocka has paid more attention to the metric mile in recent years and now finds herself among the medal contenders heading into the Olympics, especially if the race boils down to a kick finish.

USA’s 2011 world champion Jenny Simpson won the highly competitive US Olympic Trials race and has years of experience to draw upon. She has raced sparingly this year, but will still be a factor in Rio.

Compatriot Shannon Rowbury finished a close second to Simpson at the US Trials, while 2013 world 800m bronze medallist Brenda Martinez took third spot in a scrappy race. If Martinez gets her tactics right in Rio, she could well be the top US finisher. In fact, a medal for any of the US women isn’t beyond the realms of possibility.

Dawit Seyaum and Besu Sado represent the future generation of Ethiopian middle-distance runners. Both 20 years old, Seyaum took silver at this year’s World Indoor Championships, while Sado is the African Games silver medallist. With a best of 3:58.10, Seyaum is the quicker of the pair, but Sado finished ahead of her compatriot at the IAAF Diamond League meeting in Stockholm.