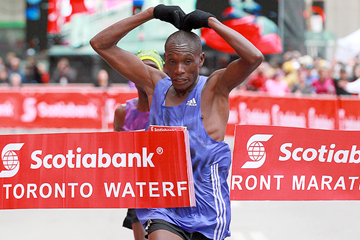 Shure and Chemtan Ready to defend in Toronto

Isshimael Chemtan of Kenya and Shure Demise of Ethiopia will return to defend their titles at the Scotiabank Toronto Waterfront Marathon, an IAAF Gold Label Road Race, on Sunday (16).

Ethiopia’s Derissa Chimsa set the men’s record of 2:07:05 in 2013 but unseasonably cold weather hampered the runners a year ago. Ultimately less than a second separated winner Chemtan from his fellow Kenyan, Gilbert Kirwa, as the clock stopped at 2:09:00.

Chemtan ran 2:08:20 in Milan in April while Kirwa has yet to run a marathon in 2016 though he tested himself at the Tilburg 10 miles race in September finishing fourth (45:40), a very good indicator of fitness. With three sub-2:07 clockings to his credit --indeed his personal best is 2:06:14 (Frankfurt 2009)-- he is more than capable of beating the course record should weather conditions and pacemakers prove helpful.

At the moment a seasonably warm, humid morning is predicted. The pacemakers will receive their instructions at Saturday’s technical meeting and may or may not adjust their target with a weather update.

While Chemtan and Kirwa will garner the most attention there are several others who bear noting. Seboka Dibaba of Ethiopia, for instance, always gives a good account of himself and has a best time of 2:06:17 (Dubai 2012). Then there are the newcomers.

“We're excited about this year's race,” said race director Alan Brookes. “We've got some great quality up front with some nice rivalries renewed. And we continue our tradition of providing a flat, fast course, a great opportunity for up-and-coming athletes to emerge as new stars.

“Abraham Habte (Eritrea), Aziz Lahbabi (Morocco), and Nicholas Rotich (Kenya) all make their debut on Sunday. And it’s the marathon so anything can happen. Of course, we're always eager to see how our Canadian stars will fare on home turf against quality international competition.”

Canada’s Eric Gillis is known as a cautious runner. In Rio he excelled beyond most people’s expectations with a 10th place finish. Rather than sit back and rely on picking off the stragglers he intends to concentrate on running fast and improving upon his 2:11:21 personal best. To his benefit he won’t have to endure a trans Atlantic flight as he lives and trains just an hour from Toronto.

Lahbabi’s debut is especially anticipated. The Moroccan has been training in Ifrane, high up in the Atlas Mountains, seeking to build upon his experiences at the half marathon. Two years ago he won the Rome Ostia Lido Half Marathon in 59:25. Unlike many of today’s marathoners the 25-year-old had a good career on the track with a 13:04.06 best over 5000m to his credit.

Once again this contest on the streets of Canada’s biggest city will offer plenty of incentive to runners to get across the line in record time. The winner collects C$ 25,000 and a course record will earn a further $35,000. The Canadian All Comers record set at the 2014 Scotiabank Ottawa Marathon by Yemane Tsegay is 2:06:54 and Toronto will offer an additional $5,000 to beat that mark.

Since her outstanding Dubai performance Demise has been practicing the art of drinking water while racing, something that troubled her in her freshman year of marathoning.

Kenya’s Rebecca Chesir carries the flag for her nation. In May she was second in Ottawa and recorded her personal best of 2:25:22 at the 2015 Dubai Marathon. No doubt she will be amongst the lead women from the start.

The race will be live streamed on www.stwm.ca beginning at 8:15 a.m. local time, thirty minutes before the gun is fired. Renowned British commentator, Tim Hutchings, will lead the commentary team with Canadian Olympian and record holder, Lanni Marchant, adding colour.