Thomas Ayeko ahead of the Sydney Marathon (© organisers)

For most of the runners in Sunday’s (16) Blackmores Sydney marathon, the goal is to finish. Simply conquering the 42.195 kilometres from North Sydney to the Opera House represents the sole aim.

For the elite, however, victory is the goal and recent history suggests the top cohort of runners face a dilemma in how to achieve that objective in this IAAF Gold Label marathon.

The recent winners of the men’s race have left their decisive move until late, conserving energy as the course crosses the Harbour Bridge and tours scenic Centennial Park before winding its way around the inner-city harbour-front and Circular Quay to the finish. Through the numerous turns in the final kilometres, out of sight can quickly become out of mind and, almost as quickly, out of reach.

Women’s race record holder Makda Harun has chosen the diametrically opposite tactics in her victories in the past two years. Both in 2016 and 2017, when she set her record 2:28:07, the former Ethiopian runner now resident in Australia, has broken away from the field in Centennial Park, well before half-way.

Harun is not running this year, but it will be interesting to see whether anyone else attempts to emulate her winning ways. Once again the Sydney race offers deep, even fields, without obvious favourites.

Kemboi and Ayeko the favourites

The elite men will be chasing the race record of 2:11:18 set by Ethiopia’s Gebo Gameda Burka in winning the 2014 race. The race records are modest by the highest international standards, but any road course in Australia’s biggest city is a compromise between aesthetics and degree of difficulty. If you want pancake-flat, better look somewhere else.

There are faster runners, but recent history of the men’s race suggests Japanese duo Norikazu Kato and Takumi Honda will be right in the finish. Since Burka’s record winning performance, there have been three successive Japanese winners. Hisanori Kitajima won in 2015, followed by Tomohiro Tanigawa a year later and then Shota Hattori last year.

Sydney will be just the second marathon for Honda. He made his debut in Nobeoka earlier this year, finishing second in 2:12:18. Several others in Sunday’s field have faster personal bests, but he looks competitive on 2018 performances.

Likewise, Kato’s personal best of 2:12:48 came in this year’s Beppu-Oita race in Japan. Sydney will be his first significant race outside Japan.

Five of the six fastest women in the race boast personal bests faster than Harun’s race record. Heading the list is Hayimanot Alemayehu of Ethiopia, who ran 2:25:51 for second place in Seville earlier this year. That was some eight minutes faster than her previous best, so it remains to be seen whether she can maintain at that level.

Janet Bawcom is the only one of the fastest half-dozen not to have run faster than the race record. The Kenyan-born US citizen has a best of 2:29:45, but is a highly respectable distance runner having made the final of the 2012 Olympic 10,000m (finishing 12th) and placed 11th in the 2016 World Half Marathon Championships.

Around 35,000 runners are expected to take part in the marathon and the other road events with the associated Sydney Running Festival.

The event will be broadcast live in Australia via Network 10 and taken internationally by Eurosport Asia and care of Fuji TV into Japan as well as Chinese TV channels. 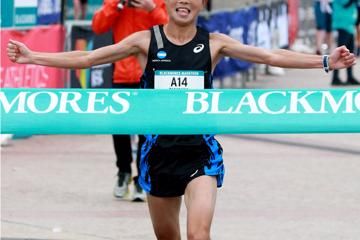 Tanigawa and Harun victorious in Sydney...