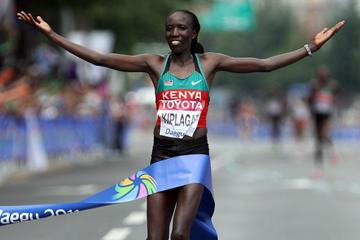 The London 2012 Olympic Games champion from Ethiopia versus the defending World champion from Kenya provides the perfect preamble to what should prove an intriguing battle for the gold medal on the streets of Moscow.

In the Kenyan corner, Edna Kiplagat, the 2011 World Championships winner, bids to make history as the first woman in history to land back-to-back World Marathon titles.

Kiplagat, 33, led home a Kenyan clean sweep of the medals in Daegu, but disappointed at last summer’s Olympic Games when she placed a lowly 20th. She returned to London for their annual Marathon in April and, thankfully, enjoyed a more positive memory of the British capital, finishing second in 2:21:32.

She has, however, admitted in a recent newspaper interview that defending the World title will be ‘hard’, borne out by the fact it has never been achieved before in the women’s Marathon.

Tiki Gelana is also attempting to buck history as she hopes to become the first Ethiopian winner of this title.

The 2012 Olympic Games gold medallist returned to London in April, however, the 25-year-old was struck by a wheelchair athlete mid-race and limped home a disappointed 16th. The World Championships will be her first competitive appearance since that unfortunate incident.

Joining Kiplagat on the Kenyan team is Lucy Kabuu, a 2:19 marathoner at her best. The 29-year-old has yet to run over the 42km distance this year but hinted at her medal-winning capabilities after posting the second-fastest women’s Half-marathon time in history when winning the RAK race in Ras al Khamiah in 1:06:09 back in February.

Also competing for Kenya is Valentine Kipketer, who claimed victory at the Mumbai Marathon earlier this year in 2:24:33.

The same applies to 2012 World Half-marathon champion Meserat Hailu, who finished second in Boston in April.

Adding to the wealth of Ethiopian talent is Meselech Melkamu, the second-fastest 10,000m runner in history, who has a Marathon personal best of 2:21:01 and finished fifth in London earlier this year. Merima Mohamed, who finished second in Paris this year with 2:23.14, completes the five-strong Ethiopian challenge.

Outside of Africa, Russia’s bid is led by Albina Mayorova, who finished ninth at the 2012 Olympics. She is joined on the five-strong team by Alevtina Biktimirova, the eighth-place finisher at both the 2009 World Championships and in April’s London Marathon.

The Japanese assault is led by Ryoko Kizaki, winner of the Nagoya Marathon in 2:23:34. She is joined on the team by the 2006 Asian Games 10,000m champion Kayoko Fukushi and, interestingly, the now 35-year-old Mizuki Noguchi, the 2004 Olympic champion.

Noguchi, who also won a World silver medal at the Paris edition some ten years ago, ran a season’s best of 2:24:05 for third place in Nagoya and will hope to roll back the years in Moscow.

Deena Kastor, 40, the 2004 Olympic Marathon bronze medallist, is also entered and the US runner has talked openly about aiming for a place in the top five.