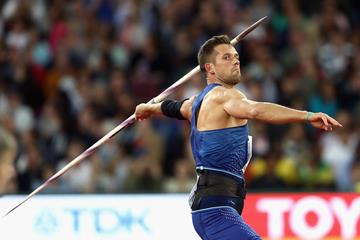 With four different winners from this season’s five IAAF Diamond League meetings and a combination of injuries and confusing form lines from some of the main contenders, the men’s javelin will be one of the most open field events at the IAAF World Athletics Championships Doha 2019.

Defending champion Johannes Vetter is one such athlete to have had an injury riddled build up. Forced to take a two-month competitive break in late June, the muscular German has made an impressive return to the competitive fray in recent weeks, winning three of his four competitions.

After hurling the spear out to a massive 90.03m for victory at The Match in his final pre-World Championships outing, the 26-year-old showed the kind of form to suggest he could become only the second man in history along with Jan Zelezny (1993 and 1995) to win back-to-back world javelin titles

European silver medallist Andreas Hofmann is the only javelin thrower to win two IAAF Diamond League meetings in 2019 with victory in Shanghai and Monaco. With a season’s best of 89.65m, the German champion is sure to be a contender in Doha.

The German challenge is bolstered by Olympic and European champion Thomas Rohler, although he has struggled to find his best from throughout 2019. His season’s best of 86.99m ranks him a relatively lowly ninth on the world lists and he has only one top-three finish on the IAAF Diamond League circuit. Nonetheless, he remains a top-quality championship performer and more than capable of featuring in Doha.

Julian Weber (86.86m), a fourth German thrower, claimed victory at the European Team Championships in Poland and is another with chances.

Arguably, the most consistent performer in the world this season is European bronze medallist Magnus Kirt, who has enjoyed a stellar campaign. The left-handed Estonian has twice set national records with 90.34m in Ostrava followed by a world-leading hurl of 90.61m in Kuortane. To further bolster his formidable record this year, Kirt has four times climbed the Diamond League podium, climaxing with a memorable win at the final in Zurich.

Among the other pretenders include Cheng Chao-Tsun of Chinese Taipei, who has made a significant advance on the international stage in 2019. Four IAAF Diamond League podium finishes – including victory in Birmingham – place the 25-year-old Asian champion among the global elite and firmly among the medal contenders for Doha.

Kenya’s 2015 world champion Julius Yego has suffered two injury-troubled years but despite competing just a handful of times in 2019 the 30-year-old gave a welcome hint he is returning to his best form after winning at the African Games in August with a season’s best of 87.73m.

Other athletes to watch include NCAA and Pan American champion Anderson Peters. Aged just 21, and with a season’s best and national record of 87.31m, the Grenadian could also emerge as a dark horse for the podium.

Trinidad and Tobago’s 2012 Olympic champion Keshorn Walcott is also entered. Still aged just 26, Walcott has a season’s best of 86.09m and earned silver behind Peters at the Pan American Games.

Edis Matusevicius of Lithuania launched the spear out to a huge national record of 89.17m to win his national title in July and is another with the armoury to feature.