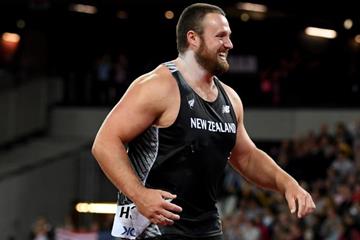 The current depth in the men’s shot put is such that someone could throw beyond 22 metres in Doha and it might not be enough for a medal.

To put the unprecedented level of shot putting into context, just four of the 16 world shot put titles to date have been won with throws in excess of 22 metres. But with a field containing nine men with PBs beyond that mark – including eight of the top 21 men on the world all-time list – then it’s safe to assume there will be some big throws in the Qatari capital.

Choosing a winner, however, is a more difficult prediction to make.

Defending champion Tom Walsh is as good a starting point as any. The New Zealander has been on a roll over the past month, winning in Paris with a season’s best of 22.44m and retaining his Diamond League shot put title in Brussels against a quality field.

The two-time world indoor champion rarely disappoints at major championships and has earned medals – three of which are gold – at the past four global championships. A loss – albeit with a still respectable 21.90m – in his final pre-World Championships competition in Chorzow might be just what Walsh needed as motivation heading into Doha.

Olympic champion Ryan Crouser has been in similarly stunning form this year after opening his outdoor campaign with a world-leading PB of 22.74m, the longest throw in the world since 1990. Apart from his 21.11m win at the Drake Relays, he has thrown beyond 22 metres in all of his other competitions this year, his only losses coming at the IAAF Diamond League meeting in Stanford and the final in Brussels, where he was third.

Darlan Romani joined Crouser and Walsh in the top 10 on the world all-time list after throwing an IAAF Diamond League record of 22.61m in Stanford. The Brazilian beat Crouser and Walsh at last year’s IAAF Continental Cup and has won a host of continental titles in recent years but will be keen to land his first global championships medal in Doha.

Compatriot Michal Haratyk, the European champion indoors and out, was third in Chorzow and sixth in Brussels, but earlier in the year he set – and then equalled – a national record of 22.32m.

Darrell Hill, the 2017 Diamond League champion, and 2015 world champion Joe Kovacs add further strength to the USA’s medal chances in this event. Hill set his season’s best of 22.35m to win at The Match in what was his final competition before the World Championships. Kovacs, meanwhile, is close behind Hill on the 2019 world list with a best of 22.31m.

Luxemburg’s Bob Bertemes is the newest member of the 22-metre club. The 26-year-old added almost a metre to his PB with a national record of 22.22m last month, but showed it wasn’t a fluke just a week ago by throwing 22.17m.

No athlete from Luxemburg has ever reached a World Championships final, so should Bertemes make it through the qualifying round, he will have made a piece of athletics history for his nation of 590,000.

World indoor bronze medallist Tomas Stanek is the ninth 22-metre man in the field, although his throws beyond that line were achieved in 2017 and 2018. Nevertheless, the Czech thrower has a season’s best of 21.67m and will be expecting to at least make the final.

Other athletes to look out for include Croatia’s 2016 world indoor bronze medallist Filip Mihaljevic, Nigerian record-holder Chukwu Enekwechi and two-time world U20 champion Jacko Gill, who has set PBs in his three most recent competitions.