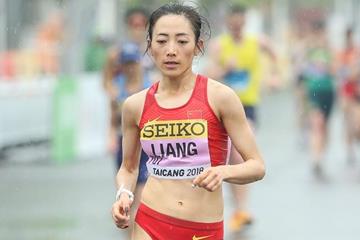 Much has changed in the fast-evolving world of women’s 50km race walking since Ines Henriques won the world title in London two years ago.

Her winning mark in the British capital, 4:05:56, was a world record at the time. It now ranks just seventh on the world all-time list, while the four-hour barrier was broken for the first time earlier this year.

Liu Hong, the world record-holder in the event with her 3:59:15 clocking in Huangshan, will contest the 20km event in Doha, throwing the 50km wide open.

Compatriot Li Maocuo is the fastest athlete on the entry list. She finished second to Liu in Huangshan back in March in 4:03:51, which was also inside the previous world record. Her only previous experience in a global event was her seventh-place finish at the IAAF World Race Walking Team Championships Taicang 2018 in 4:14:47, a PB at the time. Her results over 20km this year have been mixed, but it’s clearly the 50km where she excels.

Former world record-holder Liang Rui finished a distant seventh in that race in Huangshan, but she had been ahead of world record pace for the first 20km before suffering from stomach pains. Her 1:28:49 clocking over 20km in La Coruna – the second-fastest time of her career – shows she is in good form.

Ma Faying, fifth in Taicang last year and third in Huangshan in March in 4:07:30, is the third-best Chinese entrant but cannot be discounted.

Defending champion Henriques may no longer own the world record, but the Portuguese race walker – who will be contesting her ninth World Championships – is more experienced than anyone else in the field.

After failing to finish in Taicang last year, she rebounded by winning the European title in Berlin. Her only 50km performance this year was a third-place finish at the European Cup in 4:13:57, but if recent years are anything to go by, expect her to be more competitive in Doha.

Italy’s Elonora Giorgi was the winner at the European Cup, clocking a European record of 4:04:50. The 30-year-old has an unfortunate record at recent major events, having been disqualified from the 20km at the 2015 World Championships, the 2016 Olympic Games, 2016 World Race Walking Team Championships and 2018 European Championships. But in the 50km where the pace is a bit slower, the likelihood of receiving warnings for loss of contact is slightly lower.

European bronze medallist Julia Takacs finished in between Giorgi and Henriques at the European Cup, clocking a Spanish record of 4:05:46. The 30-year-old will be one of Spain’s best hopes of a medal in Doha.

In an event that will last about four hours, there is plenty of scope for surprises. And in a discipline still in its infancy, there’s a good chance an outsider could make a breakthrough. Ecuador’s Paola Perez, Ukraine’s Valentyna Myronchuk and Slovakia’s Maria Czakova may currently trail the world’s best by about 10 minutes, but a lot can happen over the course of 50 kilometres.