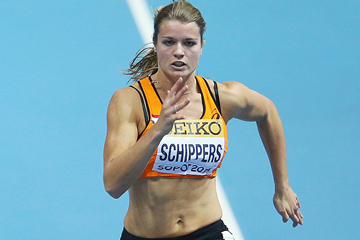 Can anyone stop Dafne Schippers? That is the question which lingers over the battle for sprint supremacy in Portland, with the Dutch speedster a worthy favourite to take her first title at the IAAF World Indoor Championships.

The 23-year-old former heptathlete has been a revelation since narrowing her focus to sprinting in recent seasons, and she has been imperious through the opening months of 2016, taking wins over 60m in Karlsruhe (7.08), Berlin (7.00) and Glasgow (7.10). More recently, Schippers trounced the field at the Dutch Championships, her time of 7.03 again proving she has a key component needed to win championship titles: consistency.

Recent history suggests a time in the region of 7.00 is required to win the world indoor title, and only two athletes have threatened that illustrious barrier all season. The second of those is USA's Barbara Pierre, who rocketed out of the blocks and held her form brilliantly to take the US title in a personal best of 7.00 last weekend. The race for the gold, barring a massive upset, should rest between Pierre and Schippers.

Marie Josee Ta Lou of the Ivory Coast took a large chunk off her personal best when running 7.06 behind Schippers in Berlin. She backed that up with a trio of wins on the French indoor circuit, form that gives her a strong chance of winning her first medal at a global championship.

The European challenge is led by Germany’s Tatjana Pinto along with British duo Asha Philip and Dina Asher-Smith. Pinto is the fourth fastest in the world this year, having run a personal best of 7.07 to win the German indoor title last month. Of the British pair, Philip looks the most likely to challenge for the title after recording a convincing win at their national championships in Sheffield, running 7.10 to Asher-Smith’s 7.15.

Trinidad and Tobago’s Michelle-Lee Ahye looks the strongest of the Caribbean entrants. The 23-year-old equalled her own national record of 7.10 when winning in Jablonec earlier this month, and looks capable of improving on her fifth-place finish at this event two years ago.