Yacob Jarso will defend his title at the Seoul International Marathon, an IAAF Gold Label Road Race, on Sunday (15).

The Ethiopian won last year’s edition in a personal best of 2:06:17, the second-fastest winning time in the history of the race when contested as a marathon, although the former top-class steeplechaser was less impressive in his last outing over the classic distance and could only place eighth in 2:14:31 at the Hengshui Marathon in September.

“However, since the end of last year I have been preparing solely for this race. I have trained well and if the conditions are good, then I have a chance of breaking the course record,” said Jarso at a press conference on Friday.

No fewer than five men will be on the starting line in the Korean capital with career bests faster than 2:07:00.

Kenya’s Levy Matebo ran 2:05:16 when he finished second at the 2011 Frankfurt Marathon and although his form has been less impressive since, he did clock 2:08:09 to record his best marathon since his Frankfurt run to finish second in the Warsaw Marathon 11 months ago.

Another Kenyan, Eliud Kiptanui, propelled himself into the spotlight when he made a spectacular marathon debut and won the 2010 Prague Marathon in what remains his personal best of 2:05:39, but he has had a number of other good performances since then and clocked 2:07:28 to finish fifth at the Berlin Marathon last September.

Ethiopia’s Abreham Cherkos, a former world youth champion on the track, also has some fast times to his name.

Cherkos can boast of personal best of 2:06:13 from the 2011 Boston Marathon but finished fifth in Seoul last year in 2:07:08 and also came home second at the 2014 Shanghai Marathon last November in 2:08:47, his last international race over any distance.

The European challenge will be led by Switzerland’s Abraham Tadesse, who ran 2:07:45 to win the Zurich Marathon in 2013. In the wake of his impressive win a month ago at the Barcelona Half Marathon when he crossed the line in 1:00:42, he will be looking to challenge Viktor Rothlin’s national record of 2:07:23.

There is also great interest in Japan’s well-known Yuki Kawauchi, who will be contesting his fourth marathon of the year.

“I set my personal best of 2:08:14 in this race two years ago so I’m familiar with the course and hopeful of doing better this year,” said Kawauchi, who has cut back on the intensity, if not the frequency, of his marathons in the past 12 months.

He won marathons on Japanese soil in Ibusuki and Koichi in January and February but said they were little more than hard training runs, and he has eschewed competing in any of Japan’s high quality marathons that proliferate in the early months of the year.

After her impressive personal best of 2:23:32 when finishing second in Houston in January, Ethiopia’s Guteni Shone should start as the favourite for the women’s race.

Getting the biggest cheers among the women runners will be South Korea’s Kim Seong-Eun, who has finished fourth in this race for the past three years and fifth in 2010.

She has multiple goals for Sunday, including finally mounting the podium. With a personal best of 2:27:20, from this race in 2013, she also wants to challenge the national record of Keon Eun-Ju, which has stood at 2:26:12 since 1997.

“I have a target of 2:25 in this race, I also want to atone for finishing eighth in the Asian Games in (the South Korean city of) Inchon last year," said Kim. "I put too much pressure on myself with respects to getting a medal. I’ve changed my mental attitude since then and training has been much more enjoyable in the last few months. At the moment, I feel the way I did in 2013."

The last local winner of the women's race was Lee Eun-Jung in 2004.

Sunday’s race will be the 71st edition of an event which was first run in 1931 over 14.5 miles and, despite several interruptions due to World War II and the Korean War, it is the third oldest road race in Asia and only supplanted for antiquity by two Japanese Ekidens. 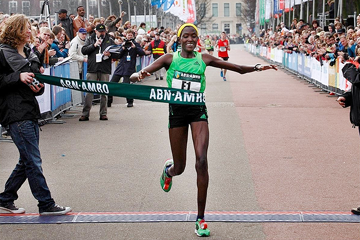 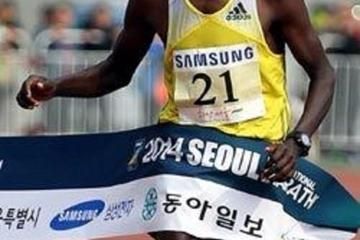