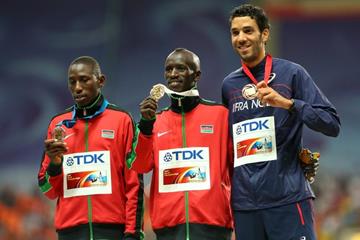 Olympic champion Ezekiel Kemboi cemented his status at the greatest steeplechaser of his generation by emulating his countryman Moses Kiptanui and securing a hat-trick of World titles with yet another supreme competitive performance.

For much of 2013 he had to play second fiddle to his countryman, the 18-year-old rising star Conseslus Kipruto. Yet when it mattered most, once again, it was the veteran Kemboi who delivered the goods to triumph in this battle between young and old. Once more Kemboi was king.

It was a ruthless display by the 31-year-old, who secured not only his third straight gold but also plundered a remarkable sixth successive steeplechase World medal after winning silvers in the 2003, 2005 and 2007 editions.

Kipruto, who had boasted a two out of two winning record against his fabled countryman this season prior to today, had to concede defeat with the silver medal today, but surely his day will come.

Back in bronze for a second successive World Championships was French athlete Mahiedine Mekhissi-Benabbad who enjoyed another consistent championship performance.

When the gun went for the start of the race many eyes in the stadium were fixed on an absorbing men's High Jump competition rather than the 15 finalists in the steeplechase. The main protagonists all raced to the front Kenyans with Kipruto making a move to the head of the field.

With a familiar forward-leaning style the teenager looks a little awkward when running and he passed the 1km mark in 2:45.96 from his countryman Paul Kipsiele Koech, the third fastest man in history, who so rarely has been given the chance to show his ability on the championship stage. The fourth Kenyan Abel Mutai, the Olympic bronze medallist was also prominent as was Uganda's Jacob Araptany and Evan Jager of the USA.

The entire field were still locked together and although Kipruto was at the front he was not causing any real damage. The pattern of the race remained unchanged with Kipruto at the front and the wily Kemboi – sporting a Mohican haircut - preferring to hide a little further down the pack to keep a watchful eye on the proceedings.

The pace was slowly being cranked up as the key players could sense the finish and the large gaps were forming across the 15-man field. Koech, Kipruto, Kemboi, Mekhissi-Benabbad and Jager were all in contention at the bell while Mutai had dropped off the medal battle. Smail's race was to end at the penultimate water jump with a fall.

Down the back stretch Kipruto and Koech were running side by side with the French athlete just behind and Kemboi still to make his move. At the third last barrier the race unravelled. As Koech started to fade, the imposing Mekhissi-Benabbad loomed on the outside and Kemboi finally made his medal bid.

The defending champion dramatically accelerated and almost within a blink of an eye he had seized control of the race. By the water jump the diminutive Kenyan was in the lead and rounding the bend he had kicked clear of Kipruto, his nearest pursuer.

While the champion accelerated off the final barrier, Kipruto sat back on landing, losing crucial momentum his chance of the gold gone. It was just left to Kemboi to finish the job down the final stretch and as he crossed the line in 8:06.01 he appeared to turn around and gesture to his younger rival that he was still the man. Kipruto, who became the youngest man in World Championships history to win a steeplechase medal, was a further 0.36 in silver while Mekhissi-Benabbad maintained his great championship record with a second successive World bronze in 8:07.86 to add to his two Olympic silver medals.

Koech failed to grab his rare championship opportunity and had to settle for fourth in 8:08.62. A further 0.05 back was Jager in fifth, who finished one place higher here in Moscow than he did at the 2012 Olympic Games.

Matt Hughes also enjoyed an outstanding run to finish sixth in a Canadian record 8:11.64. It was some performance by the 24-year-old who came to the Russian capital with a personal best of 8:20.49 but after the heat and final had managed to hack almost nine seconds from his best. Mutai, trailed home seventh.