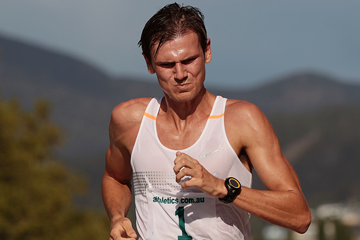 The 2013 IAAF Race Walking Challenge winner Jared Tallent’s defence got off to the worst possible start when he was disqualified in the Oceania 20km championships in Hobart, handing the win in the opening meeting of this year’s Challenge to his compatriot and rising Australian star Dane Bird-Smith on Sunday (2).

The three-time Olympic medallist was not informed of his disqualification, which came during the latter stages of the race, until after he had crossed the line.

Tallent had won this race on six previous occasions and, to all intents and purposes, appeared to have made it a seventh time when he held off a late charge from Bird-Smith, which reduced a comfortable 60-metre lead at the start of the last lap to a nerve-tingling 15 metres.

Then came the sensation, Tallent being informed by the chief judge that he had been disqualified, handing the Oceania and Australian titles to Bird-Smith, who crossed the finish line in 1:22:39.

However, he was not thought to be ready to challenge Tallent just yet, even over 20km which is now the latter’s less-preferred distance and that impression was heightened as the race around a loop on Hobart’s historic waterfront hotted up in the second half.

The early pace was a stroll, the first four kilometres being covered in a leisurely 17: 24, 1:27:00 pace if continued for the full distance but the tempo picked up at that point and reduced the pack to a handful, including Tallent, Bird-Smith, Moscow 2013 representatives Rhydian Cowley  and Chris Erickson and London 2012 Olmpic Games team member Adam Rutter.

Halfway was reached in 42:43, soon after Tallent and Bird-Smith broke clear of Erickson and then Cowley. When Tallent burst away to a lead of 60 metres with a lap to go, the result seemed inevitable. Despite Bird-Smith’s late charge, it was still that way until the judges’ intervention.

Tallent was previously disqualified in the 20km at his first World Championships in 2007 but has rarely incurred technical problems since.

Mindful of the nature of his win, Bird-Smith was still mightily pleased to have taken his first national senior title and to have walked a negative split after the slow first 10km.

“To have won my first open crown is awesome,” said Bird-Smith. “I was in great company out there today and am proud of the fact that I can mix it so well with these guys.”

Of Tallent’s surge with around four kilometres to go, Bird-Smith said: “We went from 4:10 (per kilometre) pace to about 3:40 and it was tough on the legs, that’s for sure.

Bird-Smith’s win clinched selection for him in Australia’s team for the IAAF World Race Walking Cup in May.

Cowley, his training partner, will join him after finishing third in 1:26:49. Erickson, who was second in 1:25:23, would also have been automatic but has been already selected, along with Tallent, for the 50km in the Chinese city of Taicang.

Like Bird-Smith, the women’s 20km winner Kelly Ruddick also secured her first national, and continental, title. However, she at the other end of the age spectrum from Bird-Smith, 20 years his senior.

The 41-year-old has nothing higher than state titles to her name but she broke clear late in the race to win in 1:34:44, a personal best by two minutes, and also ensured automatic selection for the World Race Walking Cup in Taicang.

Her win was already assured when Moscow representative Tanya Holliday was disqualified on the final lap. Stephanie Stigwood took second place in 1:37:39 with Rachel Tallent, sister of Jared Tallent, third in 1:38:38.

Even more creditably, Ruddick has just recovered from broken ribs.

“This is just fantastic,” she said. “I am really surprised by how things went and am obviously very happy. I’ve been pretty limited these past six weeks or so after breaking my ribs, and to now have the World Walk Cup confirmed, that is a big result.”

The same Tasmanian city also saw the 25th edition of the famous Briggs Classic on Saturday.

Zoe Buckman carried pretty well all before her late in the 2013 season as she finished seventh in the World Championships 1500 metres final after impressive wins in both her heat and semi-final.

However, athletics is nothing if not a great leveller and Buckman started her 2014 season with a loss, albeit a narrow one, to fellow-Australian Melissa Duncan, who slipped by in the last 50 metres to win narrowly, 4:10.20 seconds to 4:10.49.

Hamish Peacock improved to 81.14m in the javelin last year in making a successful late run for selection in the Australian team going to Moscow. He started 2014 in a similar vein, winning his first major competition of the year with a best throw of 79.47m.

While 2014 is a Commonwealth Games year for all Australian athletes it is also an IAAF World Junior Championships year and several juniors impressed mightily at the Briggs meeting, but it was the performance of Jesse Usoalii in winning a double in the open sprints which should probably take top billing.