Ivorian speedsters dominated the sprint finals, and East African athletes swept the podium in the women’s 5000m, but South African athletes raked in 10 medals to open a gap at the top of the medals table at the African Championships in Durban on Thursday (23).

“I’ve never been African champion in the 100m, so it’s something I’ve always wanted to accomplish,” said Ahoure, who won the African 200m title in 2014.

“I wanted to come and support my team, and one of the things we’re also trying to accomplish here is getting an Olympic qualifier time in the 4x100m relay, and that would be amazing, so that’s the goal.”

In the men’s 100m final, Ahoure’s compatriot Ben Youssef Meite scorched to victory in 9.95, regaining the title he won in 2010. Although his time was 0.04 quicker than the national record he set earlier this month, he had the benefit of a 2.4m/s tailwind.

Mosito Lehata of Lesotho earned silver in 10.04, while South Africa’s Akani Simbine recovered from a poor start to snatch bronze in 10.05.

“It’s really good because I need to try to get into the final at the Olympics,” said Meite. “I need to go back to training, fix my start, and I think I'll be ready.”

In the men's long jump, Commonwealth bronze medallist Ruswahl Samaai produced a leap of 8.40m to finish top of the podium. But, as was the case with Meite, the illegal following wind of 2.9m/s meant that it will not count as a personal best.

Compatriot Luvo Manyonga, the 2010 world junior champion who is making a comeback this season, secured the silver medal with a jump of 8.23m, albeit with a strong 4.2m/s wind.

“I know if I can be consistent, the big jumps will come, like it did today,” said Samaai. “I’m just trying to improve with every jump.”

Local giant Victor Hogan, ranked fifth in the world this year after setting a personal best of 67.62m in Stellenbosch in April, struggled to find his best form in poor conditions, with the wind working against the athletes in the men’s discus final.

He nonetheless did enough for the win with a 61.68m effort, which landed 22 centimetres ahead of compatriot Russell Tucker’s best attempt. Nigeria’s Stephen Mozia ended third (59.16m), adding to the bronze medal he had earned the day before in the shot put.

As expected, Kenya and Ethiopia took control of the women’s 5000m final from the start and were never challenged.

Kenya’s 2005 world youth 1500m champion Sheila Chepkirui and African Games champion Margaret Chelimo opened a gap in the closing stages to ensure a Kenyan one-two, with Chepkirui earning gold in 15:05.45 and Chelimo crossing the line in 15:07.56. Ethiopian champion Dera Dida was third in 15:15.26.

Managing to complete nine of 10 events in the decathlon, South African Willem Coertzen seemed to have overcome a recurring ankle injury, but he withdrew after the javelin. Although he didn’t compete in the 1500m, his score of 7196 was enough for the bronze medal.

With his compatriot forced to watch the end of the two-day contest from the side of the track, Fredriech Pretorius pocketed the gold medal with a PB of 7780.

On Wednesday, the opening day of the five-day championships, South African athletes won two of the three gold medals on offer.

Two-time Shanghai Marathon winner Stephen Mokoka, focusing on the track this year ahead of the Rio Olympics, handed the East African contingent a rare defeat in the men’s 10,000m.

Mokoka hit the front at the bell and drove hard to the line to win in 28:02.97, edging out Kenya's Wilfred Kimitei by 0.21 in a tight sprint finish.

Jaco Engelbrecht produced a 20.00m heave to win the men’s shot put, and African record-holder Amy Sene of Senegal won her third continental title in the hammer with a 68.35m effort.

BACK
Pages related to this articleAthletes
Ben Youssef Meite 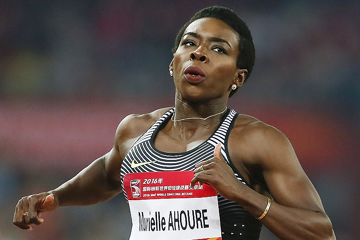