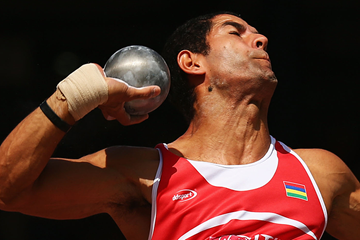 Decathlon victory for Thierry on home soil in Reduit

Mauritian record-holder Guillaume Thierry came from behind to win the decathlon at the African Combined Events, part of the IAAF Combined Events Challenge, on his home track at the Maryse Justin Stadium in Reduit on 2-3 April.

Training partner Marthe Koala of Burkina Faso was victorious in the heptathlon; in contrast to Thierry, Koala led for almost the entire duration of the competition.

Italy’s Vincenzo Vigliotti was the early leader in the decathlon after clocking 10.81 in the 100m and jumping 7.17m in the long jump. Compatriot Michele Calvi then moved into the lead after a 14.37m effort in the shot.

Thierry posted the best mark in the shot with 14.47m, but after running 11.51m and leaping 6.87m in the long jump, he was sitting in third place after three events. Despite setting a lifetime best of 1.93m in the high jump, his only PB of the weekend, Thierry remained in third place overall as Calvi cleared 1.90m and Vigliotti sailed over 2.08m to add 11 centimetres to his personal best.

Calvi, competing in his first decathlon for almost two years, started the second day well with a 14.73 clocking in the 110m hurdles, his strongest event. He made further inroads on his compatriot’s lead after throwing 46.67m in the discus, again the best mark of the day, while Vigliotti threw 36.87m and Thierry managed 44.14m.

But everything changed in the pole vault. After clearing 3.60m, Vigliotti withdrew from the competition due to pain in his adductor. Calvi moved into the lead, having cleared 4.20m, but Thierry sailed over 4.70m and was just 46 points behind the Italian with two events to go.

Thierry threw 61.47m to Calvi’s 58.35m in the javelin, giving the Mauritian a one-point lead going into the 1500m. His task for the final event was simple: simply stay ahead of Calvi. He did so comfortably, crossing the line in 4:50.31 with Calvi more than 30 seconds in arrears.

Thierry, who finished fourth in this competition last year after failing to register a mark in the long jump, ended with a score of 7481, just 110 points shy of the national record he set when winning the All-Africa Games title last year. Calvi finished second with 7305 while Fabrice Rajah of Mauritius was third with 7020.

African champion Marthe Koala opened the heptathlon by winning the 100m hurdles by a clear margin, clocking 13.72. After equalling her PB of 1.72m in the high jump, she had a 10-point lead over Estonia’s Mari Klaup, who had recorded 14.05 and 1.75m in the first two events.

Klaup then moved into the lead after throwing 12.99m to Koala’s 12.53m in the shot, but the Burkinabe athlete regained pole position after running 24.82 in the 200m and ended the first day with a 99-point lead over Klaup.

Koala achieved her third discipline victory of the weekend in the long jump after leaping 6.01m. With Klaup managing just 5.37m, Koala’s lead grew to almost 300 points. Klaup made up some ground in the javelin, throwing 46.05m to Koala’s 38.26m, but she still trailed the leader by 139 points going into the final event, the 800m.

Klaup held on for second place with 5584, while South Africa’s Bianca Erwee came through strong on the second day to finish third with 5378.