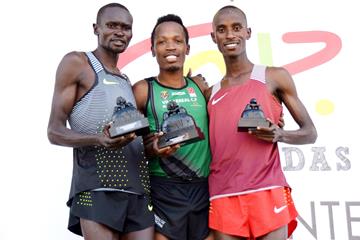 Ndikumwenayo and Cherono prevail in Alcobendas

A creditable ninth at this year’s World Cross Country Championships in Aarhus, the 22-year-old from Burundi managed his first win of the season in his third appearance on Spanish soil this cross country campaign while Cherono was an overwhelming victor ahead of Bahrain’s Rose Chelimo to become the second woman to take back-to back titles in the history of the event alongside Ethiopia’s Meselech Melkamu.

In the men’s 10.06km race, Uganda’s Thomas Ayeko set the early pace, closely followed by compatriots Maxwell Rotich and Timothy Toroitich, plus the Burundian pair of Ndikumwenayo and Rodrigue Kwizera while Spain’s Abdessalam Oukhelfen still travelled in the leading pack by the third kilometre.

After successive 2.3km loops covered in 6:46 and 6:38, Ayeko had opened a 10-metre gap on Ndikumwenayo, himself two seconds clear of Rotich, while Kwizera, who finished 11th in Aarhus, and Toroitich travelled another 10 metres behind.

Ndikumwenayo caught Ayeko half way around the penultimate circuit while Kwizera overtook Rotich to move into third. By the bell (6:45 for the lap) the Burundian led with Ayeko running at his shoulder while the 19-year-old Kwizera passed six seconds behind the leader but two ahead Rotich.

Over the closing loop, the Spain-based Ndikumwenayo managed to get rid of Ayeko and just 1.2km home it became clear he would be the eventual victor. Compatriot Kwizera broke away clearly from a fading Rotich with Toroitich back in fifth but still ahead of European U23 5000m bronze medallist Oukhelfen.

At the tape the victor was timed at 29:23 to finish four seconds ahead of Ayeko with Kwizera completing a classy podium another four seconds adrift.

Speaking in reasonable Spanish, having lived for three years in the Mediterranean city of Castellón de la Plana, Ndikumwenayo said: “This is my first success at a World Athletics event so I’m more than joyful. I would like to compete at the World Indoors in Nanjing next March over 3000m and then I’ll prepare to compete in the 5000m at the Tokyo Olympics”.

Coached in Italy under the guidance of Massimo Pegoretti, who is also the coach of European 10,000m bronze medallist Yemaneberhan Crippa, Ndikumwenayo also spoke of his weekly routine. “I’m working hard with daily double sessions for an overall 170-180 kilometres,” said the winner, who has a 3000m PB of 7:41.04 but failed to finish the 10,000m at the World Championships in Doha.

Cherono in a class of her own

In the women’s race, Portugal’s European U20 3000m bronze medallist Mariana Machado set the early pace alongside 2017 world marathon champion Rose Chelimo. After the opening kilometre this pair was marginally ahead of Portugal’s Carla Salomé Rocha and Cherono, who had decided to take it easy in the early stages.

However, the 23-year-old Kenyan soon took command of the race and with seven minutes on the clock heated up the rhythm to open a sizeable margin over the rest in a matter of few hundred metres.

A 7:42 2.3km loop from Cherono effectively ended the hopes of any other competitor as she had built a 10-second margin over Chelimo and Machado by halfway, this tandem another eight seconds clear of Rocha. At the bell, with 2.3km left, the World Cross seventh-place finisher had a clear lead over Chelimo, who had finally managed to break away from the 19-year-old Machado while her fellow Portuguese Rocha had been caught by Spain’s steeplechase specialist Irene Sánchez-Escribano.

At the tape Cherono had increased her lead to 18 seconds on Chelimo, herself 21 seconds ahead of Machado, while Rocha finally got the better of the Spaniard over the last kilometre.

“I think today’s win has been much easier than last year’s when the circuit was really muddy,” said 23-year-old Cherono, who was fresh from a 48:15 15km performance in Nijmegen for third last Sunday. “My next event will likely be a road race in Vienna next month but for now I’ll return to Kenya. I would like to make the Kenyan team (for the Olympics), but the standard is extremely high. I still have to decide on whether I’ll pick the 5000m or the 10,000m.”