Yang Jiayu continued to lead into the second half, while the chase pack started to splinter. At the 10km mark, Yang Jiayu still had a 12-second lead over Liu while Yang Liujing and Qieyang trailed further behind.

Liu started to close on the long-time leader after 13km, eventually catching her at about 15km. Yang Jiayu's pace didn't fade, but she couldn't quite match Liu's relentless tempo on the final lap as the world record-holder covered the last two kilometres in 8:34.

Joined by Zhang Jun, Wang led from the outset and passed through 5km in 20:01 and 10km in 40:03. Olympic silver medallist Cai Zelin and Cui Lihong were more than a minute adrift, reaching half way in 41:04, closely followed by 2012 Olympic champion Chen Ding and Li Xiaobin.

Wang cranked up the pace at 13km and opened up a gap on Zhang, who initially tried to go with him but then started to suffer. Working together, Cai and Chen managed to make up a bit of ground in the final stages, but Wang was already assured of the victory and crossed the line in 1:20:49, 11 seconds inside the Olympic qualifying mark.

Karlstrom a class apart in Alytus

World bronze medallist Perseus Karlstrom returned to the roads for the first time in seven months at the International Race Walking Festival in Alytus on Friday (18), winning the men’s 20km event in 1:20:58.

Karlstrom set off at a steady pace with Britain’s 2016 world U20 champion Callum Wilkinson close behind, passing through five kilometres in 20:38 a couple of seconds ahead of Ukrainian duo Nazar Kovalenko and Ivan Losev.

After reaching half way in 40:32, the leading duo began to increase the pace and they passed through 12 kilometres in 48:31. Unable to maintain that pace, Wilkinson drifted back slightly while Karlstrom powered on ahead. By the time he reached 17 kilometres (1:08:40), he had a 20-second lead over Wilkinson.

Karlstrom slowed slightly in the final kilometre, but he crossed the line in 1:20:58 to finish two seconds inside the Olympic qualifying standard. With a strong final circuit, Losev and Kovalenko came through to take second (1:21:10) and third (1:21:12) respectively, while Wilkinson was fourth in a PB of 1:21:21.

"My goal was to have a good race and go for the victory," said Karlstrom. "I didn’t have a specific time in mind. It’s been a really strange year and it’s good to have at least one race before winter training."

In the women’s race, Virbalyte-Dimsiene had Hungary’s Viktoria Madarasz for company during the early stages, passing through eight kilometres together in 36:08. But the Lithuanian, cheered on by the home supporters, gradually began to pull away and by 14 kilometres her lead over Madarasz was almost one minute.

Virbalyte-Dimsiene, the fourth-place finisher at the 2018 European Championships, maintained her pace to the end and finished in a season’s best of 1:30:54. Madarasz was second in 1:33:41, comfortably ahead of Spain’s Ainhoa Pinedo (1:37:50).

Croatia’s Kristina Hendel comfortably won the Usti nad Labem Half Marathon on Saturday (19) in a PB of 1:13:27, while Bogdan-Ivan Horovydsky of Ukraine took the men’s title in 1:03:53, taking seven seconds off the PB he set just six days ago.

The event had been scaled down so that it could comply with the regulations currently in place in the Czech Republic, and the elite races comprised all-European fields.

Hendel led from the early stages, passing through five kilometres in 17:05 and 10 kilometres in 34:27. At the half-way mark, her lead had grown to almost 30 seconds over the chasing trio: Marcela Joglova of the Czech Republic, Nuria Lugueros Diaz of Spain and Fatna Maraoui of Italy. 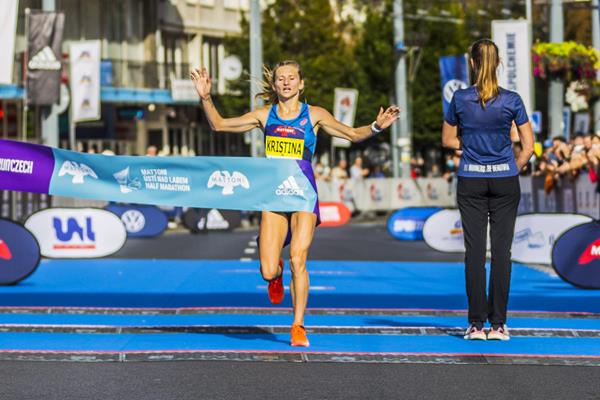 The men’s race was slightly more competitive. Horovydsky bided his time as part of a seven-man lead pack during the first half, passing 5km in 15:07 and 10km in 30:22. The pack started to break up in the second half and by 15km it had become a two-man race between Horovydsky and Italy’s Said El Otmani.

The duo pushed one another right through to the end before Horovydsky eventually pulled clear, winning in 1:03:53. El Otmani followed him across the line five seconds later, while Emmanuel Roudolff-Levisse was third in 1:04:34.

Turkish double for Atac and Demir at Istanbul Half

Turkey’s Sezgin Atac ran away from Spain’s Adel Mechaal in the closing stages of the Istanbul Half Marathon, winning the World Athletics Gold Label road race in a PB of 1:03:16.

Mechaal, the 2017 European indoor 3000m champion who was making his half marathon debut, finished second in 1:03:25. Kenya’s Bernard Cheruiyot Sang and Ethiopia’s Getaye Fisseha Gelaw, who were up with the leaders until the final few kilometres, finished third and fourth respectively in 1:03:51 and 1:03:58.

In the women’s race, Kenya’s Daisy Jeptoo Kimeli led for the first half, but Turkey’s Fatma Demir came through in the latter stages and went on to win in 1:13:17. Kimeli held on for second place in 1:13:29, while Esma Aydemir was further back in third in 1:15:40.