Claire Tallent in action at the Australian Championships (© Getty Images)

Race walking 50 kilometres on your own may not be every person’s idea of a good time, but Claire Tallent and Caio Bonfim were happy to embrace the concept at the Australian 50km Race Walking Championships.

Bonfim and Tallent were all the way winners of the men’s and women’s events, respectively, and each had their own rationale for enduring a solo effort along with the distance.

World bronze medallist Bonfim, who had left his home city of Brasilia earlier in the week in the expectation that he might be race walking at least part of the distance with 2012 Olympic champion Jared Tallent, was happy to come in in well within four hours at his ‘second’ event.

Claire Tallent, for her part, won the first Australian women’s championship at the distance and said she was more than happy to support what was a historically significant event for both Australia and the Oceania area.

Tallent making history as she goes

Tallent had virtually no opposition – certainly no close opposition – as she race walked her way to a win in 4:28:52, well outside the personal best 4:09:33 she set in taking a bronze medal at the IAAF World Race Walking Team Championships Taicang 2018 earlier this year.

Tallent said she had been “flat for the last few months” as she suffered through a couple of minor illnesses.

“But this was about supporting the championships,” she added. The 50km distance for women, added to the World Championships programme in London last year, increased the diversity of events open to her and other women race walkers.

“Women all around the world are eager to participate,” Tallent said. “I’m fortunate to be a pioneer.”

The 50km has certainly been a late-career fillip for Tallent, who had done three World Championships – including London – and one Olympic Games 20km events through her career. She relishes the opportunity to be a role model for others to follow.

“Personally, it’s been significant for me,” she said. Then, with a nod to husband Jared who was standing nearby, she added: “I’ve seen the joy Jared has had in walking the 50 and the inspiration he has had from those (men) who went before him.

“(The 50km) is the ultimate challenge in our discipline. It’s very satisfying to be setting an example for other women to follow.”

Tallent’s performance, along with her Taicang medal, is almost certain to see her selected for the World Championships in Doha next year.

“It’s going to be a unique experience,” she said of the prospect of race walking into the Doha night, “so time on legs at this stage is critical.”

Australian athletes are used to making long journeys in the quest for international competition, but for Caio Bonfim it was a rare experience. It was a 13-hour flight from Brazil to Australia and, pretty much while he was in the air, the competitive landscape he would arrive in was changing.

Jared Tallent, who has been out of competition for almost two years with various hamstring issues, was intending to complete at least part of the national championship. That was until he stubbed his toe badly while taking out the washing at the Adelaide home he shares with Claire and infant son, Harvey.

Instead of covering 30km of the race distance, Tallent was restricted to limping around handing out drink bottles to Claire. He said that his aim now is the Australian 20km Championships in Adelaide in February and a 50km in Dudince the following month.

In his absence, Bonfim was unopposed as he race walked to a 3:55:24 victory, little more than eight minutes outside the personal best he set when he finished ninth at the distance at the 2016 Olympics.

Bonfim was fourth in the 20km in Rio, too, and then took the bronze medal in that event at last year’s World Championships. He said he would almost certainly stick to just the 20km in Doha.

While acknowledging it would have been preferable to have had Tallent – whom he described as “one of the giants” – in the race, Bonfim said he was nonetheless happy to have had the experience.

“It’s kilometres in the legs at this stage of the build-up,” Bonfim explained. He said the race weather had been excellent and the course, a two-kilometre loop along a virtually flat path through Melbourne’s central Fawkner Park, was a very good one for race walking.

Two open races over 20km were also staged in conjunction with the championships. Olympic and World Championships representative Rhydian Cowley won the men’s race in 1:24:24 while surprise Commonwealth champion Jemima Montag, just back from three weeks’ altitude training in Colombia, took out the women’s event in 1:35:48.

BACK
Pages related to this articleAthletes
Claire Woods 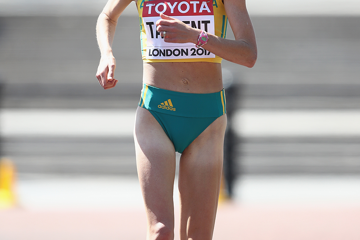