Selemon Barega's world U20 record* in the 5000m and Christian Coleman’s dominant victory in the 100m highlighted the action on the track at the Memorial Van Damme in Brussels on Friday (31), the second of two 2018 IAAF Diamond League finals.

Breaking away from compatriots Hagos Gebrhiwet and Yomif Kejelcha with 250 metres to go, the 18-year-old went on to a 12:43.02 run to become the fourth fastest ever over the distance, trailing just Kenenisa Bekele, Haile Gebrselassie and Daniel Komen whose performances were all world records. For his part, Barega knocked more than four seconds from the previous world U20 mark of 12:47.53 set by Gebrhiwet in Paris six years ago.

"I came for the win and was not at all thinking about a time, but in some way everything came together," said Barega, whose previous best was 12:55.58.

Earlier, Coleman powered to a dominant 9.79 100m victory the first of the evening’s two world leads.

Propelled by a blistering start, Coleman shot to a quick early lead, one he extended to a metre-and-a-half by the midway point. He continued on, confidently dashing away to the fastest time in the world since 2015 to finally eclipse the 9.82 personal best he set last year to end the night in a tie as the seventh fastest man of all time.

The victory will also leave Coleman where he left off in March after winning the world indoor 60m title just a few weeks after breaking the world record over the distance: as the most talked about 100m sprinter in the world.

“I put myself back in the discussion today,” Coleman said.

Ronnie Baker, the world leader coming in to Brussels, was the slowest out of the blocks and never managed to mount a challenge. He was second in 9.93, edging Yohan Blake by 0.01. Reece Prescod was fourth in 9.99.

Chepkoech tailed pacesetter Caroline Tuigong for the first 1000 metres, but then forged on alone, slowly padding her lead with each passing lap. Norah Jeruto fared best, finishing second in 8:59.62, her first journey into sub-nine territory. Hyvin Kiyeng was third in 9:01.60 to round out a Kenyan 1-2-3.

A pair of seven-hour flights that transported Salwa Eid Naser from Jakarta to Brussels earlier today didn't seem to leave the 20-year-old any worse for the wear.

Running comfortably for the first half, the Bahraini took command as she approached the final turn then simply extended her lead through to the finish to secure her first Diamond Trophy. Naser clocked 49.33, the second fastest of her young career just a day after anchoring Bahrain to gold in the 4x100m relay and silver in the 4x400m at the Asian Games in the Indonesian capital.

World champion Phyllis Francis was a distant second in 50.51 with US champion Shakima Wimbley third in 50.77.

The woman Naser succeeded as IAAF Diamond League champion, Shaunae Miller-Uibo, chose to only defend her 200m crown, which she did with the confidence and dominance we’ve come to expect from the 24-year-old Bahamian.

Running even with world champion Dafne Schippers through the turn, Miller-Uibo pulled ahead as the pair approached the straight to finish unchallenged in 22.12. Schippers held on for second, clocking 22.53 ahead of another Dutchwoman, Jamile Samuel, who clocked 22.64.

“It was a hard battle to win this race, especially after such a long season,” said Miller-Uibo, who remains unbeaten in nine races this season. She’s also on the slate at the Continental Cup in the 200m.

The Spaniard carried a slight lead into the fourth barrier, but Shubenkov drew even over the fifth and built a visible lead by the sixth. From that point he was never threatened. Ortega clocked 13.10 with Jamaican Hansle Parchment a distant third in 13.35, a scant 0.01 ahead of European champion Pascal Martinot-Lagarde of France.

In the women’s 100m hurdles, a late-race charge propelled Brianna McNeal to a 12.61 win, 0.02 ahead of Kendra Harrison. Danielle Williams of Jamaica, the 2015 world champion, was third.

Muir holds off Houlihan in the 1500m

In the 1500m, European champion Laura Muir added another major victory to her resume, holding off Shelby Houlihan's late-race challenge.

Muir took the lead as she entered the backstraight, upping the tempo to gap Sifan Hassan who was pushing the pace early on. Behind her, Houlihan moved into third midway through the final lap and second as she entered the final straight, but couldn't catch the Briton who went on to clock 3:58.49 to Houlihan’s 3:58.94. 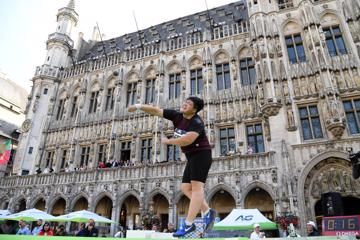 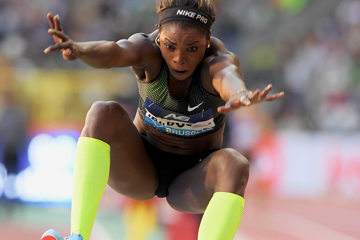