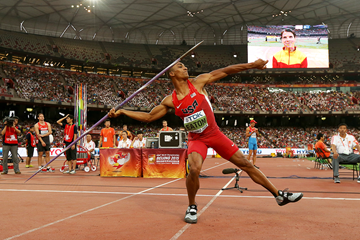 Defending champion Ashton Eaton kept alive his dreams of breaking the decathlon world record after throwing 63.63m in the penultimate event, the javelin.

His throw was almost five metres farther than the one he achieved when he set the world record of 9039 three years ago. He followed it with a throw which landed just shy of the 65-metre line, but after putting his all into the throw, he stepped over the line and the red flag went up.

There was no further improvement in the third round, so it means that Eaton’s total heading into the final event is 8216 – a score that would put him 15th on this year’s world list for the full decathlon. To better his own world record, he would need to run 4:18.25 in the final event, the 1500m. His PB is 4:14.48.

There is one man in the field with a faster PB than Eaton: Algeria’s Larbi Bourrada. And, crucially for Eaton, Bourrada could challenge for the bronze medal if he gets close to his PB of 4:12.15. If Bourrada tries to do that, then Eaton could use him as a pace maker. Bourrada is currently in sixth after throwing 63.82m in the javelin.

Canada’s Damian Warner looks to be as safe in the silver medal position as Eaton does in the gold. He threw 63.50m in the javelin and has a margin of nearly 100 points over Rico Freimuth in third place. The German has held on to his bronze medal position after throwing 60.61m in the javelin, but will come under attack in the 1500m, one of his weakest events.

Russia’s Ilya Shkurenev and Germany’s Kai Kazmirek are also capable of coming through to take the bronze medal. Shkurenev threw 60.99m in the javelin and Kazmirek managed 62.55m.