Bekele and Burka win at San Silvestre Vallecana in Madrid

Burka had suprisingly little opposition from Kenya’s Linet Masai and crossed the finish line more than a minute before her main opponent, with a winning time of 30:59.

Bekele dominates from the gun

Bekele, who turns 26 on 21 January, set the pace from the early stages of the race. Only four athletes remained at Bekele’s shoulder after 2km, when the clock read 5:40. They were a quartet of Spaniards, the two-time SPAR European Cross Country Championships silver medallist Ayad Lamdassem, the 2012 Spanish 10,000m champion Manuel Penas, José Carlos Hernández and Roberto Alaiz.

Soon, only Lamdassem could live with Bekele’s pace and the pair went through the halfway point in 14:01, with 13 seconds between themselves and a nine-strong chasing pack.

Lamdassem, 31, managed to stay with Bekele until 8km, which was reached in 22:02 with a four-man group comprising of Penas, Alaiz, Hernández and Enrique Sánchez languishing 29 seconds in arrears.

The much-feared and infamous hill 2km from the finish proved to be a decisive point for Bekele, who broke away from his Spanish rival to secure the win in 28:29, coming home 16 seconds in front of Lamsassem, who was second in 2010 and third last year.

As for the women - it was a mixed men’s and women’s race - the much anticipated clash between Burka and Kenya’s 2009 World 10,000m champion Linet Masai never materialised.

The Ethiopian dictated the pace from the gun and crossed the 2km point in a brisk 6:02 while Masai was five seconds slower.

Burka strengthened her lead in the next 3km as she clocked 15:01 at halfway to Masai’s 15:11. Spain’s Diana Martín, a creditable eighth at the European Cross Country Championships in Budapest on 9 December, was a distant third in 15:54 while her compatriot Marta Domínguez was fourth in 16:27.

Burka clearly enjoyed the festive atmosphere during the second half of the race and built up a handsome 34-second margin over Masai with 2.5km remaining, with Martín a further 39 seconds adrift.

The Ethiopian crossed the line  24th overall in 30:59 while Masai faded in the closing stages to clock 32:13 for second place in the women’s race (and 38th overall) while Martín was third in 32:32. 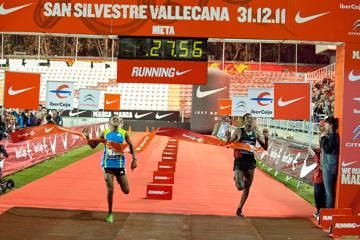