After equalling his own world 60m hurdles record of 7.29 in the semifinals at the World Athletics Indoor Championships Belgrade 22, Grant Holloway of the United States was unable to go faster in the final, but despite having to re-set himself after whacking hurdle three his time of 7.39 was still amply sufficient to deliver him his first big international indoor title.

Having missed out on Olympic gold last summer, the world outdoor champion looked perfectly pleased with his performance in what was his 57th successive 60m hurdles win, a sequence that began eight years ago when he was 16. As well he might.

If anything, however, the celebrations of the silver medallist were more raucous, as France’s 30-year-old European champion Pascal Martinot-Lagarde rose to the challenge as so often before to finish second in 7.50 after finishing fast and smoothly over the two final hurdles.

Bronze went to Holloway’s compatriot Jarret Eaton on 7.53m, ahead of Spain’s Asier Martinez, who clocked 7.57.

It was a second peak of achievement for Holloway after equalling the world indoor 60m hurdles record mark of 7.29 he set last year as he won his semifinal by a huge margin.

The 56th consecutive 60m hurdles win for the world champion and Olympic silver medallist initially showed up with a winning time of 7.31, but it was soon confirmed as 7.29 to match the figures he achieved in Madrid on 24 February 2021.

But as he strode away to prepare for his final it was medals, rather than times, he appeared to have on his mind – and one in particular.

The title defence of Britain’s Andy Pozzi came to an end as he finished fourth in the first semifinal in 7.60.

The three semifinals produced their own mini-drama as Japan’s Shusei Nomoto, third in the first race, and Britain’s Dave King, third in the last, both clocked 7.565 as they contested the last qualifying place.

Another British athlete, Michael Rosswess, was involved the last time a similar turn of events occurred in these Championships, when he finished level with Marc Blume of Germany in the men’s 60m semifinal at the 1995 edition in Barcelona, with both clocking 6.619.

It was decided by the toss of a coin – Rosswess lost, Blume went into the final, where he finished fifth.

On this occasion the means of deciding, eventually, took the form of the two hurdlers’ vest names which, under the gaze of the athletes involved, were solemnly folded up and sellotaped and put into a bag, from which a volunteer selected the lucky athlete – who turned out to be King, going through therefore to his first international championship final in unique fashion after equalling his personal best.

King made decent use of his luck of the draw, finishing sixth in 7.62.

Nomoto, meanwhile, was left to wander off into a corridor, hands to his face, desolate.

BACK
Pages related to this articleDisciplines
60 Metres Hurdles 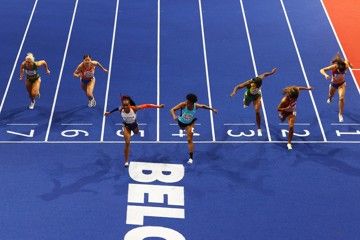 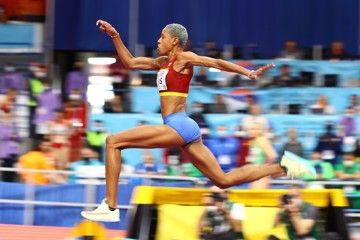 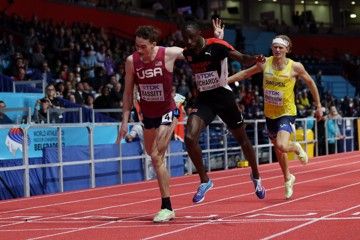 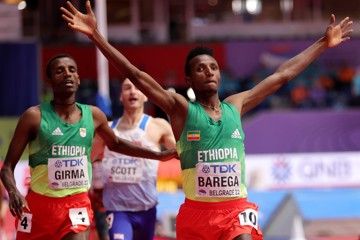