Heroics by Blignaut, Chebet and Kipruto highlight day one in Tampere

A captivating women’s 5000m, won with a blinding turn of speed, a punishing men’s 10,000m, exhibiting a peerless display of endurance, and a shot put duel for the ages, the gold medal grabbed via a rare combination of physical and mental strength – the first night of the IAAF World U20 Championships Tampere 2018 had just about everything.

And that’s before we even get to the first five events of the men’s decathlon, which seems set up for a riveting conclusion on day two.

We’ll start with the men’s shot put, an event that started at a simmer, slowly came to a boil and finished with an absolute flourish.

Entering the fifth round, it appeared for all the world like South Africa’s Kyle Blignaut was set for gold, having thrown a decent if unexceptional 21.12m to start, which had stood the test of time in the rounds that followed.

But then up stepped Adrian Piperi of USA, who hurled a whopping North American U20 record of 22.06m, which moved him to fifth on the all-time U20 lists.

That had to be enough for gold, right?

Just seconds later, Blignaut entered the circle and dug deep into his reserves to find an incredible, almost illogically perfect throw of 22.07m. It gave him gold by the tiniest margin, and the moment his mark came up on the board he threw his arms in the air in exultation.

WHAT AN INCREDIBLE COMPETITION

Piperi will no doubt find his silver bittersweet given his outstanding runner-up mark of 22.06m, while back in third there was nothing but delight for Greece’s Odysseas Mouzenidis, who set a national U20 record of 21.07m.

But while the gold medals are set to head to the same destination next week, the manner in which they were earned couldn’t have contrasted more. Kipruto won his title via a long, punishing run from home in the 25-lap race, his decisive move coming a little over 3000m from home.

The early pace was cut out by Uganda’s Jacob Kiplimo, a bronze medallist in the same race two years ago, who passed 3000m in a steady but far scorching 8:25.42.

Soon the Ugandan grew tired of the river of men flowing in his slipstream, so he moved to the side, the first time Kipruto hit the front. The Kenyan injected a noticeable surge which whittled the leading pack to five, but shortly after the halfway point he got sick of being in front and slowed quickly, forcing teammate Solomon Boit to take a turn.

Rhonex Kipruto of Kenya runs a brilliant championships record to take gold in the men's 10,000m in Tampere#IAAFworlds pic.twitter.com/PmTokVqJ7s

That left him all alone out front, and he never looked like faltering as he reeled off another 2:37.68 split to finish, his lead only growing as he approached the line to win by a wide distance.

“I'm very happy, it was a great day,” said Kipruto. “It was an honour to represent my country and my people. The competitors were tough but I was able to stay focused.”

The women’s 5000m, meanwhile, turned into a burn-up over the final lap, which Beatrice Chebet covered in a blistering 62.66 to take gold.

The Japanese duo of Tomomi Musembi Takamatsu and Miku Moribayashi made the pace respectable in the early stages but drifted back into the pack before 2000m. The pace didn't pick up again until Ethiopia’s Ejegayehu Taye put in a 71.87 lap – the first lap at sub-15-minute pace – through the 4000-metre checkpoint in 12:40.12.

“I am happy to win the gold medal for my country,” said Chebet. “It was tough racing the two Ethiopians as they are strong but I had a good fight with them.”

Beatrice Chebet helps Kenya break Ethiopia's 10-year dominance in the event as she takes gold in the women's 5000m final in Tampere#IAAFworlds pic.twitter.com/1pTRNHjlbA

Taye also set a lifetime best although the 18-year-old was hoping for more on her European debut.

“Second feels bad,” she said. “I wanted first. The time was good and the team tactics were good. They worked but we still wanted the gold medal.”

Moloney magnificent on day one

At the halfway point of the men’s decathlon, Australian Ashley Moloney is in firm command after a great day for the 18-year-old, where he racked up 4319 points in total, leaving him with an overnight lead of 216 points from compatriot Gary Haasbroek.

Moloney started the day as he meant to go on, with a superb breakthrough performance in the 100m to win in 10.51, a championship best. That put him in firm command, but his whole championships was soon at stake in the long jump where he fouled the first two attempts.

With the pressure at its peak, he produced a safe leap of 7.06m to keep himself in contention on his final effort. In the shot put, his opening effort of 12.83m was his best, and that sent him into the afternoon session in third place behind France’s Makenson Gletty and Finley Gaio.

That’s when Moloney turned the screw on his rivals, producing a stunning display in the high jump. He first soared over a PB of 2.07m, then raised the bar to 2.10m, which he cleared at the first attempt. That netted him 896 points which edged him in front of Gletty on the overall standings.

In the 400m, however, everything changed.

Gletty pulled up injured shortly after departing the blocks, while fellow Frenchman Steven Fauvel-Clinch never even made it to the start line after injuring himself in the high jump.

Moloney, meanwhile, seized full advantage, powering his way around the track from lane two to take a decisive victory in 46.86, a world U20 decathlon 400m best.

BACK
Pages related to this articleAthletes
Kyle Blignaut 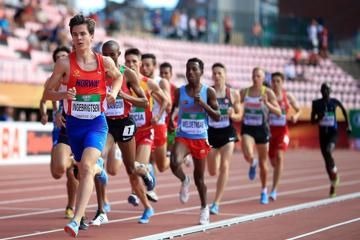 Dramatic start to decathlon as IAAF World U20... 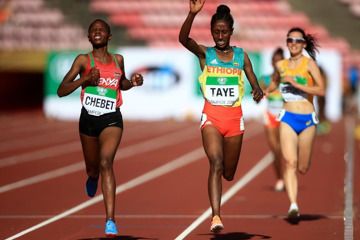 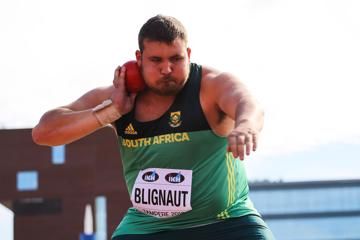 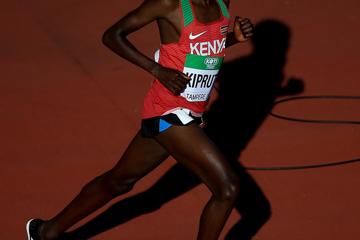