Braz, who has been preparing for the indoor season in the Polish village of Spala, sealed the competition with a first-time clearance at 5.78m before extending his margin of victory with a second-time clearance at 5.86m. He then raised the bar to a would-be indoor lifetime best and world lead of 5.94m but that height proved beyond his capacity last night.

Greece's 2014 world indoor champion Konstadinos Filippidis finished second on countback at 5.70m ahead of Frenchmen Kevin Menaldo and Axel Chapelle. Menaldo surprisingly took the domestic bragging rights while Chapelle, the 2014 world U20 champion, came away with an outright lifetime best.

The anticipated clash of the reigning global champions didn’t materialise; world champion Shawn Barber of Canada finished fifth with a 5.50m clearance while local star Renaud Lavillenie, who was making a delayed season’s debut due to a quadriceps injury, only cleared 5.50m on his third attempt to finish seventh.

Piotr Lisek didn’t play any significant role either, no-heighting at 5.50m three days after clearing a world lead and outright Polish record of 5.92m in Cottbus.

Morris will renew her rivalry with Olympic champion Ekaterini Stefanidi of Greece in Clermont-Ferrand next weekend while Braz and Lavillenie headline the men’s event.

After breaking a mark which had stood since 1999 last Friday, Emmanuel Korir’s world indoor 600m best of 1:14.97 was eclipsed after just eight days on the record books.

“Isaiah is an incredible athlete and I was thankful to have him in the race to push me," said Loxsom. "He's a rare talent and it was fitting to showcase the past alongside the future of a programme I was so proud to be a part of."

World indoor champion Yulimar Rojas got her season off to a flying start by producing the best indoor triple jump performance in the world for four years.

Competing at the Spanish Clubs Championships in Madrid, the Olympic silver medallist bounded out to a South American record of 14.79m.

Airine Palsyte took the silver medal at the European Championships in Amsterdam last July but the Lithuanian is the in-form jumper ahead of the European Indoor Championships, which will be held in Belgrade from 3-5 March.

Fresh from defeating Olympic and European champion Ruth Beitia in Cottbus on Wednesday night, Palsyte cleared a world lead and outright national record of 2.00m on her third attempt in Vilnius on Saturday afternoon.

“I thought it would be just a training session for me but I managed to break the Lithuanian high jump record,” said Palsyte on her Instagram page.

Britain's Andy Pozzi opened his season with a world-leading mark in the 60m hurdles at the Welsh Indoor Championships in Cardiff on Saturday.

The two-time world indoor finalist stopped the clock at 7.56 in the heats to eclipse Garfield Darien’s world lead by three hundredths before winning the final in 7.57 ahead of David Omoregie, who set a PB of 7.63.

Rebekka Haase produced the pick of the action in Erfurt on Friday (27), powering to a lifetime best and world lead of 7.14 over 60m while world silver medallist Cindy Roleder clocked 7.97 in her first outing over the 60m hurdles in 2017.

There was also some fast sprinting at the Bauhaus Indoor Gala in Stockholm where 2014 world indoor 60m champion Richard Kilty clocked 6.57 on a temporary track before Dina Asher-Smith clocked 7.23.

Czech shot putter Tomas Stanek kicked off his 2017 campaign with a world-leading 21.32m effort in Jablonec, Czech Republic, on Saturday.

It was an absolute personal best by the 25-year-old whose previous best coming in was 21.30m set at this meeting one year ago. "What more could I ask for," Stanek said.

Elsewhere at the meeting's 45th edition, Kim Collins won the 60m in 6.64 and Czech Petr Svoboda, the 2011 European indoor 60m hurdles champion champion, clocked 7.66 in the final and was one tick faster in the heats with 7.65.

Jorge Urena of Spain tallied a 6249 national record to win a four-nation Combined Events match in Prague, also an early season world lead. The 25-year-old added 173 points to his previous Spanish standard set in Reims one year ago.

In Vienna on Saturday, Eilidh Doyle of Great Britain won the 400m in 51.86, also a world lead. Compatriots Daniel Gardiner and Kyle de Escofet won the long jump with 7.74m and 60m at 6.66, respectively. 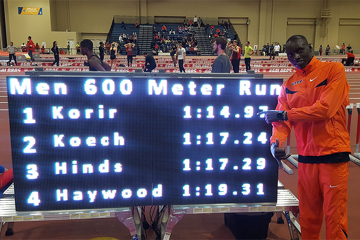