US sprinter Candace Hill in action in the 100m (© Kirby Lee)

Eleven seconds is a barrier only a small handful of women beat each year in the 100m; the benchmark of the world’s elite. But never before has a 16-year-old covered the 100m within that time.

USA’s Candace Hill smashed her PB – and the world youth best, the American junior record and the US high school record in the process – when clocking 10.98 to win at the Brooks PR Invitational in Seattle.

In perfect conditions and aided by a 2.0m/s tailwind, the teenager from Atlanta took almost a quarter of a second off the PB she set last week in the invitational high school race at the IAAF Diamond League meeting in New York. Her 11.21 clocking there, set into a -1.5m/s headwind, suggested that she was capable of running a lot faster in good conditions.

She only had to wait a week for that to happen.

“I feel awesome, I’m speechless right now,” said Hill. “I just had a feeling that this race was going to be good. And it was.”

In second, Zaria Francis set a PB of 11.26 to move to equal 12th on the world youth all-time list.

The previous world youth best of 11.10 was set last year by USA’s Kaylin Whitney, breaking the 11.13 that had stood since 1976 to Chandra Cheeseborough. The former American junior record was set in 2011 by English Gardner, who clocked 11.03.

Hill, who has another year in the youth age group, now sits at third on the world junior all-time list, just 0.10 shy of the world junior record. And she will be a junior until the end of 2018.

Needless to say, she is now an overwhelming favourite for the IAAF World Youth Championships, Cali 2015. 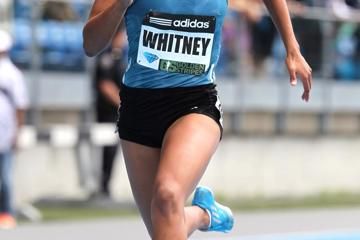 Whitney and Williams in record-breaking form ...