Japan comes from behind to win Chiba Ekiden

For the first time in five years, host nation Japan won the Chiba International Ekiden, a mixed six-stage relay held over the marathon distance on Monday (24), coming from behind to overhaul defending champions Kenya on the sixth and final stage.

The race started with Australia and New Zealand fighting for the lead on the first stage, but then Russia took over the lead on stage two. The third and fourth stages were between Russia and Japan, but the race truly got going on the fifth stage over 10km when Matthew Kisorio brought Kenya from sixth to first, making up a minute deficit to set a stage record of 27:42.

“I was determined to win this,” said Hagiwara. “It was slow at the beginning so I was able to catch the leader. Watching the Kenyan, since she did not look good, I was confident that I can win this race. Although I lost the lead once to the Kenyan, I was determined to make my move to win the race. The ekiden was really fun. Fans along the course were yelling out my name.”

Kenya’s Julius Ndiku led 13 closely bunched teams out of the stadium. But just after 3km, Ndiku – the older brother of world junior steeplechase champion Jonathan Ndiku – started to fall behind.

Soon afterwards, Japan’s Kenta Murayama also started to drift back. With about 700m to go with the end of the stage in sight, Jake Robertson of New Zealand started to push the pace. However, in the final metres Brett Robinson of Australia caught and passed Robertson to take the 5km stage in 13:33.

Lucas Bruchet of Canada was third and Tadashi Isshiki of the Japanese Collegiate team was fourth as just four seconds separated the first four teams. Murayama was eighth, 12 seconds behind, and Ndiku was even further back in 11th place.

Early in the second stage, Jessica O’Connell of Canada and Saori Noda of the Japanese Collegiate team drew level with the leaders, Madeline Heiner of Australia and Nikki Hamblin of New Zealand. Russia’s Yelena Korobkina began the stage in fifth place, but reeled in the leaders by mid-way on the second stage to join the leaders.

Ayako Suzuki made up a 12-second deficit to join the leaders with little more than a kilometre left of the stage, just as Saori Noda of the Japanese Collegiate team began to drift back. “I didn’t expect the team to be so far back, but at least I was able to see the leader, which made my race easier,” said Suzuki. “However, I still need to work on my final sprint.”

With 800m of the stage to go, Suzuki started to push the pace, but soon afterwards Korobkina took over the lead and the world 1500m finalist started her drive for the finish. Suzuki tried to stay close, but Korobkina was first at the end of stage, while Suzuki was seven seconds behind.

New Zealand and Canada were both nine seconds behind and Australia was in fifth, 11 seconds behind. Although Kenya moved up from 11th to ninth on this stage, they fell further behind on time and were 78 seconds adrift of the leaders.

Japan’s Kota Murayama, twin brother of first-stage runner Kenta Murayama, covered the first kilometre in 2:30 to take over the lead from Evgeny Rybakov of Russia.

Six kilometres into the stage, they were being followed by Kelly Wiebe of Canada and Duer Yoa of Australia, while Henry Sang had brought Kenya up into sixth place.

Just before eighth kilometre, Murayama briefly pulled away from Rybakov, but the Russian reeled him back. With the end of the stage in sight, Rybakov sprinted away from Murayama to give Russia the lead once again.

Further back, Ken Yokote of the Japanese Collegiate team passed Australia and Canada to move into third to finish the stage 21 seconds behind Russia and ahead of Canada, Australia and Kenya.

“I think I surged unnecessarily a few times, including the opening kilometre,” said Kota Murayama regrettably after the race.

Soon after the start of the stage, Japan’s Misaki Onishi made up a three-second deficit to catch Alla Kulyatina of Russia. Approaching the half-way mark of the stage, Onishi pulled away from Kulyatina, but just like their male counterparts on the previous stage, the Japanese runner was once again caught by the Russian.

Russia ended the stage with a four-second lead over Japan. Sheimth Muriuki had briefly moved into fifth place for Kenya, but had fallen back to sixth by the end of the stage.

Kenya’s Matthew Kisorio, fresh from a 59:50 half-marathon performance last month, started the stage fast and immediately moved into fifth. A few kilometres later, he had moved into third place, while Anatoly Rybakov maintained Russia’s lead over Minato Oishi of Japan at the front of the race.

But with every stride, Kirosio was getting closer and closer to the leader and two thirds into the stage, he finally gave Kenya the lead.

Both Oishi and Rybakov tried to stay with Kisorio. Rybakov fell behind for good while Oishi made a valiant effort to stay close to Kisorio, but the Kenyan pulled away from his pursuers over the hilly part of the course and at the end of the stage Kenya led Japan by eight seconds while Russia was another 30 seconds behind.

“The Kenyan was on a different level, but since I was able to stay close, it really gave me confidence,” said Oishi.

In the early part of the final stage, Kenya’s Mercy Kibarus led with Ayumi Hagiwara in pursuit. With less than 4km remaining of the entire 26.2 mile race, Hagiwara passed the World Half Marathon Championships fifth-place finisher.

But Kibarus instantly responded and surged back into the lead. Hagiwara then took a different approach and began to patiently reel in Kirabus, slowly but surely pulling away from her Kenyan rival to give Japan the victory in 2:05:53.

In the end, Kenya finished a distant second in 2:06:29. Behind them, the Japanese Collegiate team edged past the Russian team into third.

The international ekiden, which started in 1988 with both men and women’s races, turned into a mixed race in 2007. Now in its eighth year as a mixed event, Kenya had won the past three editions, but Japan’s latest victory means they now have the same number of wins as Kenya. 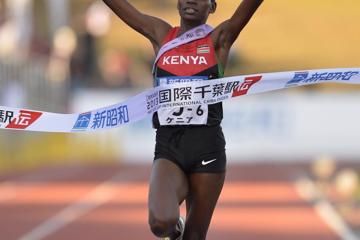