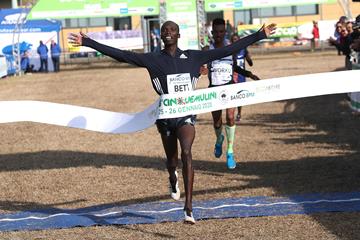 Worku, the world U20 cross-country silver medallist who won back-to-back races in Elgoibar and Seville earlier this month, stepped up the pace during the second lap and kept the lead for most of the race, closely followed by Muema, Bett, Ndikumweanayo, Chelimo and Crippa. Worku went through the second lap mark in 8:39 with a gap of one second over Muema, Bett, Ndikumwenayo and Crippa. The Italian running star was dropped by seven seconds after the halfway mark.

The leading group was whittled down to Worku, Bett and Muema, who pulled away from Ndikumwenayo after the bell and battled it out for the win during the final lap.

Worku and Bett ran neck-to-neck for most of the last lap before it came down to a final sprint with Bett overtook Worku on the final straight to cross the line in 32:08, holding off his Ethiopian rival by just one second. Muema finished third in 32:10.

“Cross country is the perfect build-up for running the 3000m steeplechase,” said Bett after securing the 16th win for Kenya in the history of the Cinque Mulini in what was his first cross country race outside of his home country. Bett plans on competing at the African Cross Country Championships in preparation for the Olympic season.

Kite went to the front and went through the first lap mark in 8:59. Battocletti, still aged just 19, managed to keep the pace with the leading quartet on the first two laps.

The smooth-striding Yavi pulled away from Kite and Jerono during the third lap to increase her lead over her opponents. By the time she reached the finish line in 17:22, her lead had grown to 11 seconds.

Kite finished second in 17:33, three weeks after her third place finish at the Campaccio in San Giorgio su Legnano. Jerono completed the podium, taking third place in 17:34 ahead of Cherono (17:47). Battocletti was fifth in 17:56.

“I am improving race after race,” said Yavi, whose victory last year came in a race held in totally different conditions with snow and freezing temperatures. “My second consecutive win at Cinque Mulini means a lot. I enjoy running on this course.”