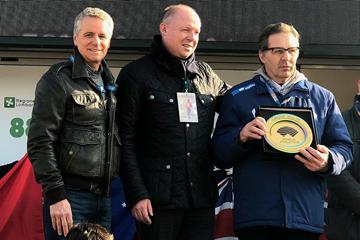 It is just over a year now since World Athletics President Sebastian Coe announced the creation of the World Athletics Heritage Plaque. This location-based award honours outstanding contributions to the worldwide history and development of athletics.

Today, Sunday 26 January, the first World Athletics Heritage Plaque was unveiled at the Cinque Mulini Cross Country, San Vittore Olona, Milan, Italy. 1983 World and 1984 Olympic 10,000m champion Alberto Cova was among the former winners of the race to join the celebrations with the current president of the organising club Guiseppe Gallo Stampino, and four other former club presidents.

The plaque which honours Cinque Mulini, one of the world's oldest invitational cross-country meetings and a member of the World Athletics Cross Country Permit series, is the first of 54 plaques which will be unveiled in public around the globe during the coming months.

On 2 December 2018, at the same time as creating the honour, Sebastian Coe announced a public competition to design the plaque. It was won at the end of March 2019 by Fernando Silva, a 27-year-old resident and recreational runner from the Brazilian city of Manaus.

Since then the plaque has been refined by the world-renowned Italian medal and trophy manufacturer Bertoni, who are based in Milan. With the renaming and branding of the ‘IAAF’ to ‘World Athletics’ confirmed by Congress in Doha prior to the World Championships last autumn, in November the manufacturing of the plaques commenced.

Despite not having a plaque to present until now, during the year a total of 54 locations have been honoured across the five plaque categories. These locations are spread across the world.

There will be some new plaque locations announcements during 2020 but this year the plaque programme will largely concentrate on unveiling those already awarded. The ceremonies will now start to come thick and fast. Next Friday (31 January), World Athletics CEO Jon Ridgeon will be in Karlsruhe, Germany to officially hand over the plaque to the annual indoor meeting, and then on Saturday 8 February in New York, the Millrose Games, the world’s oldest invitational indoor meeting, will unveil their plaque.