USA’s Erica Bougard and Norway’s Martin Roe held on to their overnight lead at the Multistars Trofeo Zerneri Acciai in Florence on Saturday (28) to take the first victories in the 2018 IAAF Combined Events Challenge.

Bougard made history by becoming the first US heptathlete to win the Multistars title. The Mississippi native scored 6327 to beat compatriot Alexandria Gochenour by 254 points.

Roe, meanwhile, scored 8228 to break the long-standing Norwegian decathlon record of 8160, set in 1999 by Benjamin Jansen.

Bougard started the second day with a 6.12m leap in the long jump to extend her leading margin over Gochenour, who jumped 6.02m. Ukraine’s Rimma Hordiyenko produced the best jump of the day; her 6.23m moved her from sixth to third overall.

The top five positions remained unchanged after the javelin as Bougard (42.63m), Gochenour (40.57m) and Hordiyenko (40.77m) all set personal bests. Nada Chroudi was the top performer in the javelin. The Tunisian threw 45.04m to move into seventh place overall.

Fittingly, Bougard ended her competition by winning the 800m, her fourth individual discipline win of the weekend. In a close race, she edged Ukraine’s Daryna Sloboda to clock 2:11.35, bringing her winning score to 6327. It is the best score at the Multistars competition since Jessica Ennis-Hill set the meeting record in 2009.

Gochenour scored 6063 to ensure a US 1-2 finish. Portugal’s Lacabela Quaresma, eighth at the IAAF World Indoor Championships in Birmingham, placed third with 5886 to finish ahead of Ukraine’s Sloboda (5804) and Allison Reaser (5799).

“I did not know that I was the first US winner at this meeting,” said Bougard. “I expected a better result in the long jump but I had fun. I visited a museum and I enjoyed the history of this city. I will compete in two more heptathlon events: in Gotzis and at the US Championships.”

Having led since the second event on day one, Martin Roe slipped to third after the first event of day two.

He equalled his PB with 15.15 but it was just the 12th fastest time of the day and meant he was overtaken in the overall standings by Belarussian duo Maksim Andraloits and Yury Yaremich, who clocked 14.69 and 14.36 respectively.

Normal service was resumed in the discus, though, with Roe throwing 48.26m to take back the lead. Andraloits threw 44.17m and slipped back into second place, 58 points behind the Norwegian. Yaremich threw 39.49m to hold on to a top-three position, just 31 points ahead of Colombia’s José Gregorio Lemos, who won the discus with 51.21m.

Yaremich set an outdoor personal best of 5.15m in the pole vault to bump his compatriot out of second place. Roe improved his personal best to 4.75m while Andraloits vaulted 4.65m.

A 66.64m throw in the javelin, just eight centimetres shy of his PB, kept Roe on pace to break the Norwegian record. Yaremich consolidated his second-place position by throwing 59.30m with Andraloits managing 50.65m.

Estonia’s Taavi Tsernjavski had been quietly creeping up the ranks with each event. 15th after the 100m, he ended day one in fifth place and had moved up to fourth with just one event to go, the 1500m.

Yaremich finished 243 points behind Roe to take second place in a PB of 7985 while Andraloits took fourth place with 7863.

In his previous appearance at the Multistars Roe finished second in Florence two years ago 13 points behind his compatriot Lars Rise. Last year Roe went on to finish 12th at the IAAF World Championships in London with 8040 points.

“I did not expect to break the national record,” said Roe, who finished second in Florence in 2016 and finished 12th at last year’s World Championships. “I was a bit worried before the hurdles and the pole vault because of an injury. I took just one throw in the javelin due to an elbow problem.

“I am very happy because the previous national record was set 19 years ago,” added Roe, whose next decathlon will be in Gotzis. “In Norway we have a lot of indoor tracks and a group of junior athletes. It’s going to be an amazing European Championship for Norwegian athletics in Berlin with a lot of medals.” 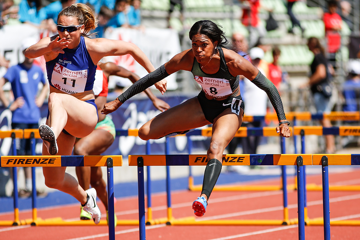