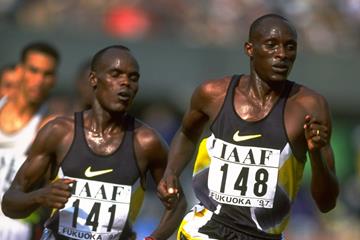 The third stage of the 1998 IAAF World Cross Challenge, which took place in Amorebieta (Spain) today, was an easy win for Kenya's Paul Koech who crossed the finish line more than 50 metres ahead of second-placed Abel Chimukoko of Zimbabwe.

Third place went to Fita Bayissa (ETH) in a race which saw nine out of the first ten places going to African runners and only France's Yann Millon's tenth place saving something for Europe. But that tenth place was also enough to put Millon - who is the only athlete to have competed in all three of the Challenge events so far this season - at the head of the standings for the IAAF World Cross Challenge, two points clear of James Moiben (KEN) and his countryman Thomas Nyariki who both total 41 points after two events.

Koech was competing in his début event of this season's challenge and he obviously found the clement, though windy weather to his liking, taking the lead in the early stages and retaining it for the rest of the race, completing the 10.2 kilometre course in 30:16, seventeen seconds ahead of Chimukoko. His win gave him equal seventh place in the standings with England's Jon Brown.

Jaqueline Maranga (Ken) won the 5.26km women's race in a photo-finish with Romania's Elena Fidatov. Both athletes crossed the line in 17.27 after a thrilling final sprint but the judges' decision gave victory to Maranga.

The victory took Maranga to second place in the women's standings for the Challenge, whilst Ethiopia's Gete Wami moved to the head of the standings with 42 points after finishing fourth.

Wami finished five seconds behind her compatriot Merima Denboba, wo is now fourth in the standings, five points behind Sally Barsosio (KEN) who totals 41 points from her three events.