Kenya’s Cosmas Kiplimo Lagat made a stunning marathon debut at the 30th edition of the Maraton de Sevilla, an IAAF Bronze Label Road Race, winning the Spanish race in a course record of 2:08:33 on Sunday (23).

Kiplimo Lagat, 20, took more than a minute off the previous best of 2:09:53, set by Ethiopia’s Daniel Abera Wadejo two years ago, when he came home almost four minutes clear of his nearest challenger.

It was a stunning breakthrough for the unheralded young runner, taking part in his first ever international race, who raced courageously right from the gun, despite his inexperience.

Kiplimo Lagat was eight seconds ahead of the eight-strong chasing pack at 10km, passed in 29:58.

Eritrea’s Amanuel Mesel moved up in the next 5km to help Kiplimo Lagat with the pace at the front of the race, with 15km passed in 45:21, with now almost a minute between the pair and a pack which had expanded to 11 men.

The pair were still together at halfway in 1:03:42 before Mesel soon dropped out.

Kiplimo Lagat was then on his own and passed 30km in 1:30:22 as the 10 chasers seemed unwilling to work together to reduce the gap which had stretched to almost four minutes.

The leader went through 35km in 1:45:30 and, by this stage, was nearly five minutes ahead of his nearest rivals, although the gap lessened over the final 7km as the men behind Kiplimo Lagat started to increase the tempo in the battle for the minor places on the podium.

Jose Carlos Hernandez was the first Spaniard home in ninth place in 2:13:26.

Solomon Bushendich had been bidding to become only the second man to successfully defend his title in Seville but dropped out at 28km and later said that he had been struggling with an injury.

It was a Kenyan debutant double on the circuit which incorporated parts of the 1999 IAAF World Championships marathon course and proudly boasts of being one of the flattest marathons in Europe as Pamela Rotich won the women’s race in 2:35:43.

If Rotich’s time was modest in comparison to her compatriot that won the men’s race, she showed her fighting spirit by having an enthralling duel with Spain’s Elena Espeso in the second half of the race and just managed to pull away from the local hope in the final kilometre to win by five seconds.

BACK
Pages related to this articleAthletes
Cosmas Kiplimo Lagat 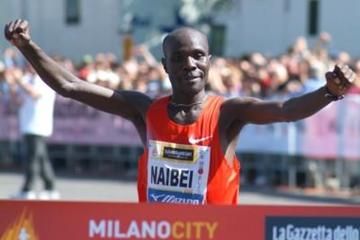